The fourth generation of Mazda 3 was introduced in 2018 and it followed the Kodo design language, showcased by the RX-Vision concept in the 2015 Tokyo Motor Show.

The compact-segment was one of the most important in more markets around the world. From mass-market brands to premium brands, every car-maker had at least one member there. It was the market were a hatchback, a sedan, a station-wagon, a coupe or a convertible could find a place and a buyer. Mazda chose to launch only a 5-door hatchback and a sedan for the Mazda 3 in that segment.

The Kodo design language was like a flowing metal in motion. And the 3 was just like that. The swept headlights, the flowing lines, and the short deck confirmed those principles. The sculptured door panels were flowing, following the air-stream.

Inside, the 3 featured a double level design and the 8.8” infotainment screen rising up in the middle. The center stack hosted only the climate control buttons. On the center console, the designer installed the commander control, a rotary knob.

The 3 featured a choice of engines ranged between a 1.8-liter diesel and 2.5-liter gasoline. All versions were assisted by the Mazda's new M Hybrid system, which increased fuel-efficiency and driving experience. The standard transmission for the entire range was a 6-speed manual, while a 6-speed auto was on the options list. The platform offered a front independent suspension and trailing arm in the rear. An all-wheel-drive version was available as well, but still without an independent suspension in the back. 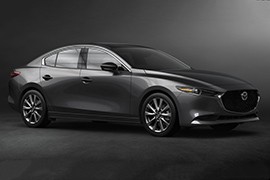