1 Modded 1969 Chevy Nova Murders Everything at the Drag Strip With 7.43-Second Run

Rotary engines are still a mystery for most people, and it looks as though they hold many secrets, even for those with long careers in motorsport, such as Travis Pastrana.
10 photos

Well, considering there are no cars you can buy that use them right now, and even if you were to go far back into history, you'd still only find a handful, that may not be too surprising. Besides, Wankel engines have proven to be more of a headache than anything else when used in cars, despite having some undeniable advantages.

The main pros for a rotary engine revolve (yup, I went there) around the fact they have way fewer moving parts, they are compact and lightweight, and they rev like there's no tomorrow, making an absolutely lovely sound in the process. The flip side is that they tend to be low on torque, they drink a lot of gas, and they can be pricey to maintain. As is usually the case, if the pros outweighed the cons, a lot more manufacturers would have used Wankel engines in their cars, so that's probably the best indicator of how competitive they are.

Well, you probably wouldn't dare to say anything bad about them whenever Rob Dahm and his 1,000 hp three-rotor Mazda RX-7 build were around, and that's because you would instantly look like a fool. That car is ridiculously powerful. It's so powerful, in fact, that one could even argue it might be detrimental to its own good. That's what 800 lb-ft (1,085 Nm) of torque sent to the rear wheels alone can do. Well, at least nobody's going to complain about any lack of twisting power.

We hear a lot about built engines, and that description can be accurate to various degrees, but in this case, we are literally looking at an engine built from scrap. There is no other like it, and considering where the industry is headed, there most likely never will be. Rob says it's classed as a two-liter, making this duel a battle between two immensely powerful cars using relatively small engines.

That's because the four-cylinder boxer in the Subaru WRX STI isn't a 2.5-liter, like the original. Well, it is, but since it's been de-stroked, the displacement is now just 2.3 liters. Fret not because the power has gone significantly up, though not quite at the same level as Rob's RX-7. Still, 862 hp for an AWD car with a super-quick six-speed sequential transmission should be enough to make this an interesting race, if not even a bit one-sided. However, this is a Hoonigan event, so we know they do their best to give everyone a real fighting chance, so we're almost guaranteed a close finish. Not to mention a flying one too. 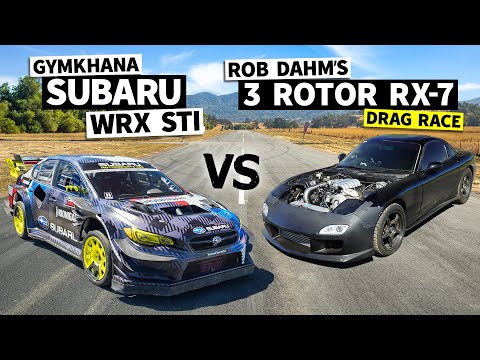