5 Suicide-Door 1985 Ford F-150 Runs Everything Backwards, Including the Burnouts
Car video reviews:
Up Next

Anyone who’s been keeping tabs on automotive personality Cleetus McFarland knows very well that in between cool events and other stuff he’s got going on (such as supercharged mini jet boats), he also has a very cool twin-turbocharged Chevy El Camino. It has been recently completed, and the 1,000-hp monster is already out and about trying to prove its drag charging mettle.
39 photos

The recent Summit Midwest Drags event was probably the first and perfect venue to showcase this awesome ride’s capabilities. That’s because we’re not dealing with a classic quarter-mile event, and instead we’re presented with an entire series of races that got spread over four days, enabling the competitors to hit a trio of different tracks.

Even more so, all of the vehicles involved in the competition needed to be street-legal because the racers had to drive them to each drag strip and take with them just the stuff that fit in a little trailer (you can see the El Camino hauling it from the 11:28 mark along with a little presentation). That was quite the effort for something packing a huge punch that was just completed a few days prior.

By the looks of it, McFarland and the “Mullet” (of course, the El Camino got nicknamed by the owner) are taking their time to adjust to one another. As such, the twin-turbo custom wonder, which has been called “stupid fast” by McFarland, sometimes likes to be as slow as a worry-free snail. One can check out the failed runs at the 5:11 and 6:15 marks, along with a couple of solo runs from the 11:05 and 15:19 time stamps, with the latter again being a dud.

Of course, we’re here for the action, and the Drag Racing and Car Stuff channel makes sure to oblige in this rather (uncharacteristically) extensive video embedded below. To put things into perspective, the good folks present McFarland’s El Camino in as many races as possible, where the twin-turbo Chevy smokes the competition with great 9.56s (2:18 mark) and 8.01s (8:35 mark) passes.

Things get even better because the one quarter-mile skirmish that attracted our attention the most involved an equally crazy 1970 Chevrolet Chevelle sending out a cloud of smoke into the air because it got Duramax diesel swapped. It may look menacing when coal rolling during the traditional burnout part, but it ultimately proved no match for Cleetus and Mullet, as the El Camino nailed a great 7.64s run at 187 mph (301 kph) against a meager 10.01s pass at just 135 mph (217 kph).

That was quite the humiliation and it wasn’t even the team’s best ET performance. That one was achieved during the first day of the event when Cleetus performed a solo run (from 16:50) with an elapsed time of 7.6-seconds and a trap speed of 170 mph (274 kph). 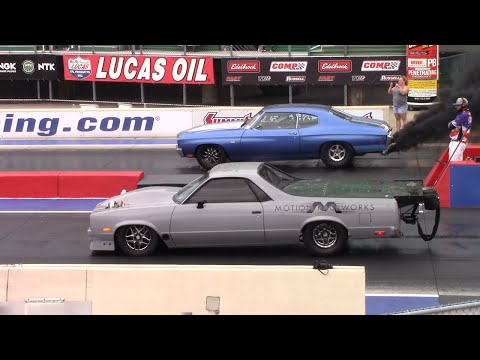 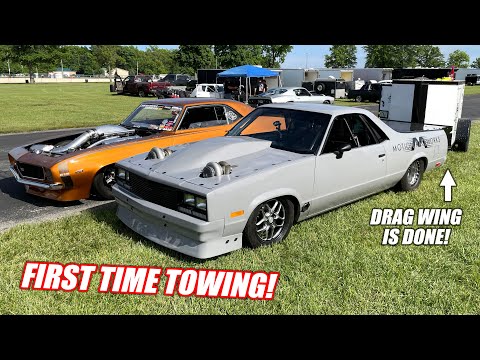