Rare Mazda RX-8 Is Up for Grabs, Might Set a New Record

It has been 10 years since I've first driven a rotary-powered car. I still remember it like it was yesterday. I was given the keys to the last edition of the Mazda RX-8. I had a full tank of gas at my disposal and 24 hours of driving ahead of me. Needless to say, I only slept 4 hours that day, not that I'm complaining or anything.
13 photos

Over the years, I've gone through different phases concerning the RX-8. I loved it at first, started disliking it after a while, and then accepted it for what it is. Let's face it, Mazda had some huge shoes to fill after the RX-7. Between 1978 and 2002, the Japanese manufacturer had built just over 800,000 units of its rotary-powered sports car. And it's no secret that the RX-7 amassed a cult following around the world.

But it's also no secret that the rotary engine still needed some improvement. Do you remember Jeremy Clarkson's first review of the RX-8: "It looks like the work of a committee. Half of them said we want a 2-door GT car while the other half asked for a 4-door saloon. And then, they decided to have both". You might be tempted to think it's all just a design thing, but I can assure you that at 6' (1.82 meters) tall, I can still get in the back seats.

The RX-8 had a good run between February of 2003 and June of 2012, with almost 200,000 units produced all in all. That makes for a quarter of all RX-7s! While most people will agree that the Spirit R is the most valuable and special edition of the RX-8, there's no denying that the 40th Anniversary model also has a certain appeal. Reportedly, only 1,000 units were built for the North American market and they were only sold in 2008.

That's 13 years ago! So it's quite surprising to see this car being auctioned off on Bring a Trailer, with its odometer only showing 1,900 miles (3,057 km)! As with all North American 40th Anniversary models, it's finished in Metropolitan Gray Mica and it has a Cosmo Red leather interior. You can't help but love the rotary design elements included in the wheels, seats, gear knob, the front and rear bumpers.

The two-rotor, 1.3-liter Renesis engine should be good for 231 horsepower and 159 lb-ft (215 Nm) of torque. That may not sound like much, but it's not always about raw power. The chassis provides an improvement in terms of torsional rigidity when compared to the RX-7 did and you might be pleasantly surprised by the driving experience. In 2008 this car was sold for $33,924. The auction just went online and someone already placed a $30,000 bid for it. With 7 more days to go, this would already make it the most expensive RX-8 on BaT ever. 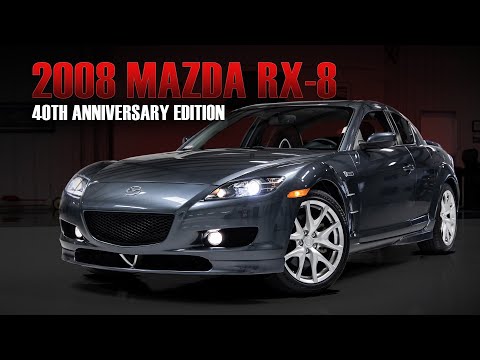