We have come to know and appreciate Tim Burton’s - the vlogger popularly known as Shmee150 on YouTube – knowledgeable and passionate way of reviewing cars from... ahem, a special category. The one that includes extremely high price tags, lots of cylinders, and many more (and especially loud) horsepower. So, time for a paradigm shift, as he drives – for the first time – a road EV on the track.
14 photos

Of course, even though its price tag is nowhere near some of the exotics he usually drives for his channel, this is no ordinary electric vehicle. Instead, he chose a Tesla Model 3 for hist first experience on a racing circuit in a series-production electric vehicle.

More so, he is driving a Startech-enhanced Model 3, with the Brabus sister company currently expanding its reach to also include such EV models. We actually dig the changes done by the German tuning expert, which are (unfortunately) solely cosmetic, because Tesla locks the performance settings out of reach for traditional customization companies.

For example, the Startech pack includes an almost completely new front end (even the fog lights have been changed), a 30 mm (more than an inch) lowered ride height, spectacular Monoblock M alloys, some neat carbon fiber details, extended side skirts, a three-piece spoiler at the back, and more.

After checking out the exterior there’s also a quick look at the interior (for the bigger review jump to the 13:00 mark), which now has tailored touches that include Alcantara and carbon fiber inserts, and we’re off to the fun part.

That would be the actual driving on the racetrack, from the 3:25 mark, though not before Shmee checks out the “toy box” - including the fart tricks and the simulated racing using the car’s steering wheel. Fortunately, he gets bored very fast and proceeds to showcase some interior and exterior POV driving of the Model 3 across an unnamed (and smallish) racing circuit.

By the way, if there’s one thing to extract here – aside from Tim’s ample smiles after driving a few hard laps and even doing a launch control start (6:35 mark), is that he’s actively considering an EV acquisition for his famous “Shmeemobiles” garage. We could say he came out impressed, right? 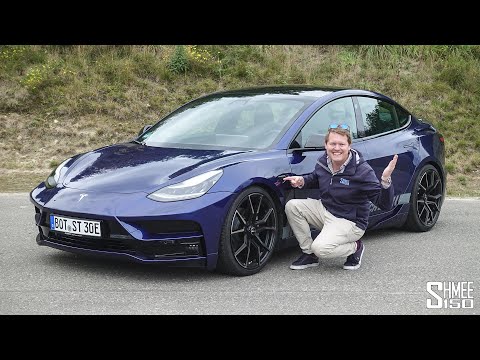