3 Jeep Trackhawk vs 790 HP Audi RS Q8 ABT Signature Edition, Loser Is Stunned and So Are We

Aurel Niculescu
The dawn of a new pony/muscle care era is upon us. And it is amazingly quirky to see the disparate OEM views that are now – quite unfortunately – ready to stop colliding.
19 photos

Stellantis has decided that along with diesel-equipped Jeeps and Rams, Dodge should allow the last calls for ICE-powered Challenger and Charger models. So, people will rush to buy the 2023 model year collectibles and then lament the end of the Mopar age of gasoline-fueled oomph. Some, perhaps more and more over time, will even seek hope within the planned sustainable future.

The rest will probably have to abandon all shame and jump across the competition’s fence to secure a seventh-generation S650 Ford Mustang. You know, that iconic pony and muscle car that was given an exclusive new EcoBoost and Coyote V8 ICE lease of life – at least for the foreseeable, near future. So, probably, clashes of stock Coyote versus Hemi V8 muscle will become rarer, soon. Until then, we can still relish them… even in Canada.

This is because the videographer behind the Wheels channel on YouTube is an enthusiastic fan of the Mission Raceway Park dragstrip (located in Mission, British Columbia, Canada), and it is again time for some “Thunder by the River” as he now gives us stock Coyote vs. Hemi muscle car action (uploaded on September 27th). Oh, and did we also mention the Ford Mustang GT is a convertible that meets the Dodge Challenger SRT 392 coupe in a battle of the heavyweights?

Anyway, the technical details are quite easy to grasp. So, the Mustang GT Convertible makes do with a Coyote 5.0-liter Ti-VCT V8 engine that is good for 450 hp and 410 lb-ft (556 Nm) while its traditional Hemi 392 foe of a Challenger packs slightly more oomph – 485 hp and 475 lb-ft (644 Nm). However, the first moments of the quarter-mile skirmish give a surprising advantage to the open-top underdog. But will it last? 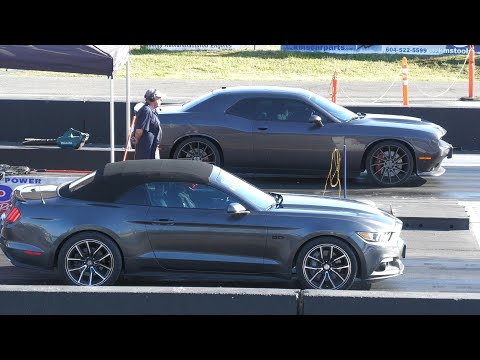