1 Challenger Scat Pack vs. The Detroit World Is a Lesson Full of Quick Drag Runs

Blast From the Past: World’s Biggest Demolition Derby Crowned a Toyota as Winner

Dodge’s long-running Charger nameplate has been in its seventh generation for no less than a decade. That, along with the time it spent as a two-door coupe before upgrading to a four-door configuration, should be enough to establish a good relation with lady luck.
12 photos

The Charger has been around since the 1966 model year, so it’s pretty safe to say that fans of the breed had plenty of time to see just about anything. Of course, with the model being a darling of the racing community, it’s no wonder Dodge has delivered so many versions inclined to run the quarter-mile.

But we’re not entirely sure that Stellantis’ brand has ever considered engineering the Charger for immaculate mathematical conditions. Sure, the SRT Hellcat does come with identical details (6.2-liter Hemi V8, up to 717 horsepower for the 2021MY) for both the Charger and Challenger. But how about identical ET and MPH?

That’s an interesting run and one that was fortunately caught on camera by the good folks over at the Drag Racing and Car Stuff channel. Of course, we’ve grown accustomed to seeing all sorts of entertaining shenanigans from them, world record Fusions or six-second Chevy-swapped Mazda RX-7s included.

So, for their latest exotic occurrence, here’s a Dodge Charger SRT Hellcat lining up for the traditional quarter-mile skirmish with a very red Fox Body Ford Mustang. Yes, one could say the Blue Oval didn’t stand a chance from the get-go, but we all know very well that in this wonderful world anything could happen.

As it turns out, this time around, we’re given a rather solo performance by the Charger driver as the Dodge easily nails the win following a less than stellar performance from its retro opponent (it’s kind of hard to make up the numbers, but it seems the Fox Body was over 14 seconds).

Better yet, the Hemi monster also comes with an identical ET and MPH result of precisely 12.16 seconds at 121.6 miles per hour (195.69 kph for our Euro readers). We don’t see what happens next, but hopefully they also played the lottery afterwards. 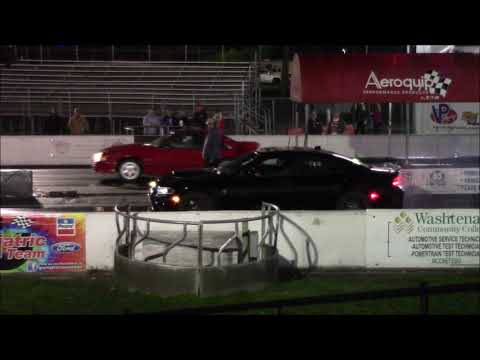