The 1990 Mazda RX-7 owned by Rick Prospero of Rick’s Fab Shop is well known among drag racing aficionados, with the Japanese ride affectionately known as “Green Mamba” doing the runs for some years now. That doesn’t mean each encounter isn’t as spectacular as always, with the Big Block Chevy-swapped monster gapping everything in its path, with a breathtaking exception.
31 photos

Normally, the Mazda RX-7 is your usual flavor of JDM-toting front mid-engine, rear-wheel-drive sports car packing the company’s proprietary rotary engine. It’s naturally a darling of the customization community, and we’ve seen modified examples put the power to good use even against supercars.

But every now and then comes a swap that needs to be seen in order to believe it. One example of the monster breed is Rick Prospero’s 1990 Mazda RX-7 that’s probably been dubbed “Green Mamba” because of the color and the Big Block Chevy power needed to slay its rivals at the drag strip.

It’s been around for some time—Rick even shared a trio of telling pictures from 2014, 2016, and last year on social media. But just like fine wine, it has aged to become better and better, to the point of capturing the 2021 Bradenton Street Car Takeover event record with a 6.87s pass at a trap speed of 202 mph (325 kph).

Best of all, the guys over at the Drag Racing and Car Stuff channel on YouTube managed to capture the moment on camera (starting from the 3:38 mark in the video embedded below). They also shared the news that he nailed an even faster personal best of 6.83 seconds at 208 mph (335 kph) during TX2K 2021.

Packing a fairly tame-looking setup consisting of the Big Block Chevy and twin-turbo 88mm Garrett mills strapped to the sides of the engine bay, the RX-7 might not seem much for the untrained eye. Still, this Japanese with an American heart packs a mighty punch and will gap turbo and wheelie Mustangs or any outlandish drag racing creatures all day (and night) long.

There was just one notable 1/8-mile exception, the flaming Chevy Camaro we get to see at the beginning of the video (from the 0:55 mark), as the GM representative won by just 0.01 seconds! After all, it did seem to sport a rocket booster strapped to its hood. 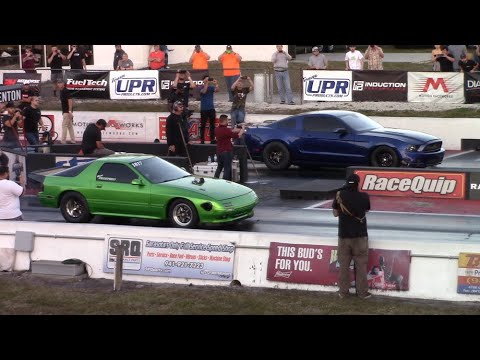