Dodge introduced the third generation of its large MPV, the Caravan, in 1995 along with its sibling, the Chrysler Town&Country, and it was available in two wheelbases.

There was a time when minivans were the primary vehicles seen at schools and filled Walmart's parking lots. It was the best family car on the market, with car-like handling and room for five and loads of space in the back. Dodge offered the Caravan as a seven-seater as well.

Chrysler knew how important was aerodynamic for a car. After all, they made the Airflow back in the '30s (and failed since people trusted body on frames more). That's why it designed the Dodge Caravan/Chrysler Town&Country with a long and front area that started from the front bumper and ended on the roof. It was a continuous surface that formed an aerodynamic shape and helped the car cut through the air effortlessly. From its sides, the Caravan featured sliding doors on the curb-side, with an option for another one on the driver's side. Later on, the carmaker included both of them on the standard features.

Inside, the MPV featured a car-like dashboard with rounded shapes. The seats were higher than in a regular sedan, but they ensured a comfortable ride. In the back, the Caravan was available with two rows of seats. The interior room was big enough to carry a 4x8 (1.2 x 2.4 m) plywood with the second and third seat rows removed. Also, the interior features list was long and comprised comfort and safety features.

Under the hood, Dodge installed a choice of four engines ranged from a fuel-efficient 2.4-liter up to a potent 3.8-lite V-6. The four-speed automatic transmission was standard on the entire range. 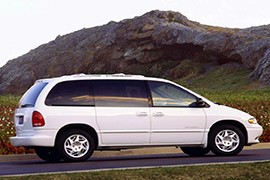