4 Supercharged Toyota Tundra Has an LS Surprise for Demon, Mustang, Supra, and RS3

Of course, this isn’t just any old and rusty Ford Fairmont; it was initially called the “Fairmont 5” by its builders from Sloppy Mechanics. Now it has a new owner, new drivetrain components, and is ready for another shot at all-time quarter-mile sleeper glory.
34 photos

Originally built more than four decades ago, the 1978 to 1983 Ford Fairmont series usually belongs to the unassuming compact car category. It was created as the successor to the equally forgettable Ford Maverick (the sedan, not the pickup) and premiered (along with the Mercury Zephyr) the Blue Oval’s Fox architecture made famous by the Fox Body Mustang.

Well, the Fairmont probably won’t go down in popular history because a 1978 Fairmont Futura coupe was the 100th million vehicle produced by Ford. Instead, it might carve a special place for itself inside the sleeper vehicle niche thanks to outlandish creations such as this 1982 example initially known as the “Fairmont 5.”

That was back in the day when the custom sedan was made famous by its original builders from Sloppy Mechanics. Now, according to a recent video (embedded below) from the Drag Racing and Car Stuff YT channel, it has found a new home for itself, along with a new lease on life.

As per the description shared by the D.R.A.C.S. crew, the Fairmont was acquired by the new owner as a roller and was bestowed upon a completely new drivetrain. It includes a 5.3-liter SBE (stock bottom end) LS engine, a VS Racing 80-mm turbo, Mickey Thompson slicks, a stock 8.8 Ford/Lincoln locker, welded rear end, and a neat suspension setup... among others.

By the way, the only way of knowing this really isn’t a beat-down, rusty Fairmont is hearing the LS rumble from under the hood or catching sight of the short lateral exhaust. Or perhaps we’re mistaken because this ride also proves its mettle at the drag strip when going against an interesting crop of competitors.

First up, from the 2:25 mark, is an unsuspecting Porsche 911 that quickly proves its worth via a speedy 9.88-second run at almost 138 mph (223 kph). Judging by the surprised audience, that clearly wasn’t enough, because the unassuming Fairmont tackles the quarter-mile with an even better 9.02s at over 152 mph (245 kph).

We're not dealing with a one-hit wonder, though. Next up, from the 3:47 mark comes a parachute-equipped red Chevy Camaro that doesn’t fare any better than its German rival, as its 9.67s run still doesn’t prove enough to beat the almost perfect 9.01 result of the Blue Oval machine. 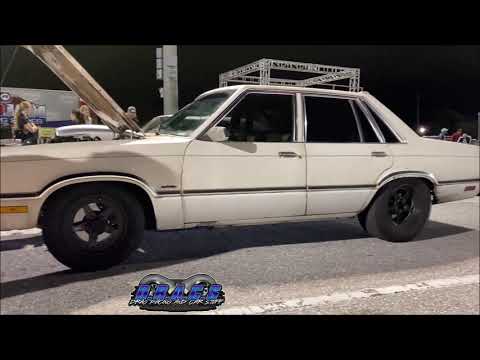