5 Ken Block's Next Hooning Car Might Be an EV After Mustang Mach-E 1400 Experience
Car video reviews:
Up Next

You know how they say that father – daughter relationships are always something special. Well, we say that any good parent has a marvelous relationship with the children when they’re all on the same page. Of course, that might seem a little nutty when discussing the Ken Block and Lia Block pair...
66 photos

We have already seen Ken Block go through the universal parenting experience when teaching his daughter how to drive. After all, he’s only human and she’s only a teenager. With the exception that said driving lessons were about drifting, and the teenager part having to do with her being just 13. So, a little different, after all.

We have also seen Block and the team go through the hustle of acquiring a beat-down Fox Body Ford Mustang 5.0, set it as a Vanilla Ice tribute, and give it as a surprise present for Lia’s 14th anniversary. Only that she has a love-hate relationship with this model, so she’s not getting the car – it’s actually a loaner for her to get some proper drifting lessons from none other than Vaughn Gittin Jr.

With Chop Daddy (Zac Mertens) back as the host, we join Lia and Ken Block on a casual day at the Utah Motorsports Campus. Yes, the time has come for Lia to actually use the Fox Body ‘Stang for its newly intended use – along with headmaster drifter Vaughn. It was actually a very big day, because the school curriculum also included proper teaching lessons about shift cars, as well as a loop around the big track in a Ford Focus RS.

But we’re here for some sideways action, so cue back to Lia, Ken, Vaughn and the Fox Body. By the way, sentiments are changing towards the car, as in Lia’s own words, she says now about the car that it's “cute!” Of course, Vaughn rolls his eyes just a tad because he’s like Ken – he loves the Fox Body. Unfazed, just like a proper teacher, he starts explaining what she’s going to learn – things such as car placement, control, and traction.

The lesson includes all the usual elements for an out of terms driving sessions: J turns, donuts, and the master trick of the figure eight. If you want to skip directly to the driving part, then jump over to the 4:15 mark and prepare for unforeseeable action – just as a real track day should be.

Well, it doesn’t take long for the first breakdown to occur (6:35) and Vaughn immediately starts RTR-ing the Fox Body with some help from Lia as well, both digging holes in the front for more air to reach the engine (it was flooding with leaked cooling). So, after checking the trackside repairs box as well, they get back into the saddle for the donuts part of the lesson.

Of course, that doesn’t complete before encountering new problems, as the first full lock of the steering has the suspension giving up – they end up with a broken wheel and tire (from 8:45). No problem, because just like with real life drifting, they just give a shout out to other folks minding their own business at the track and get help from the guys at Franco Racing.

Now equipped with a nice-looking blue wheel and a new tire, the school is just about ready to conclude... deep into the night and after they first run out of gas. They are not giving up until nailing the last party trick – the troublesome figure eight – and when Lia finally does, she is a 14-year old that made both her teacher and daddy extremely proud... 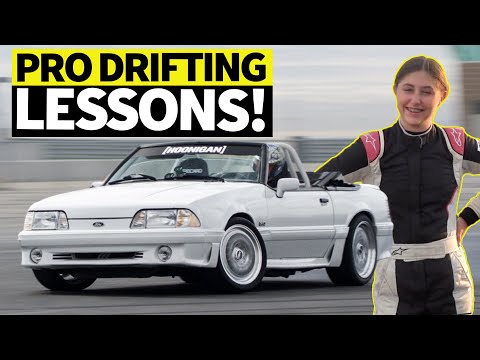