3 Travis Pastrana Goes Full Gymkhana This Year, Subaru to Back Him Up

Scientists, over the course of humanity’s long history, might have set out to find out before if there is such a thing as “too much light.” The simple answer is always yes – judging by the accounts of people who had the mishap of not getting a good night’s rest when the neighbors are sleepless. But, then again, in the automotive world you always need perspective when setting out to find answers to such (apparently) mundane questions.
19 photos

This is what star driver Ken Block has done in his latest video (embedded below). He decided to take science into his own hands, and he forewarns us that “high speed science” is involved when trying to find the proper answer to his question: “Is there a such thing as too much light?”

That got us instantly hooked and we quickly skimmed through his explanations to see the night light action. If you are a little more patient, we can tell you Block has teamed up with Rigid Industries. Thus, his SVC Offroad Ford F-150 Raptor was treated to no less than 300,000 lumens of added light.

Just to put that figure into perspective, a normal car’s single headlight low beam is about 700 lumens, while the average high beam only goes up to approximately 1,200 lumens!

So, with Block’s SVC Raptor off-roader prepared to shine out like a little sun it was time for the practical experiment – science is nothing without testing, after all. Which is exactly why Ken was taking the pickup out into the night in the middle of the Utah desert.

The SVC Offroad-modified Raptor rig was also treated to a new round of upgrades and Block took the opportunity to show them off for the first time. Or, at least, partially reveal them under the garage lights because the rest of the time it was all pitch black. We are kidding, actually – Ken took ample time to see us through all the modifications before embarking on the Utah night ride.

These include an all-new Fiberwerks widebody with paint done by LNC Motorsports, new motorsport-inspired reflective graphics courtesy of Troy Lee Designs, a bespoke Borla exhaust, additional suspension modifications and an entire rear-end swap with an F9 fabricated one complete with locker and full float axles by Currie Enterprises. Because Block is a household name already, his Raptor sports the new Fuel Off-Road “Block” signature wheels wrapped in 40-inch tires from Toyo.

As for the night-driving antics in the middle of the Utah desert, we expected a little more action on his behalf – but Block was decidedly scientific about everything and devised a series of tests to compare the stock, adaptive and then all lights together.

Still, there would be no fun seeing Block without a little race – so jumping to the 8-minute mark will take you straight to the hot laps he took with the regular lights a Raptor comes equipped with, the adaptive light setup from Rigid, and then all of the custom ones combined. 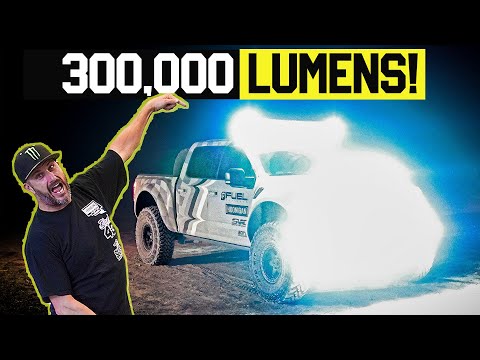