Supercharged Toyota Tundra Has an LS Surprise for Demon, Mustang, Supra, and RS3

Home > News > U-turn
Aurel Niculescu
While it may not enjoy the same success as its smaller sibling (a.k.a. the midsize Tacoma), Toyota’s Tundra has many reasons to be proud of the country that adopted it. After all, it’s the first full-size Japanese pickup truck that was built in North America for the local market. As such, it’s no wonder it’s been eagerly adopted and eventually adapted for just about any American job.
26 photos

That includes one that will involve a lineup of two vehicles going as fast as they can for a set distance... yes, drag racing. Granted, regular folk will most likely point the Tundra towards a construction site or logging site residing on the far side of a dense forest rather than sticky tarmac.

But, if this recent video (embedded below) from the Drag Racing and Car Stuff YouTube channel is any indication on the matter, the Tundra is not only adept at handling situations involving slippery surfaces. With proper preparation, it can also deliver suspenseful runs when it guns for quarter-mile glory.

As always, the following video also serves as a lesson for anyone thinking that drag racing is just a matter of sticking the biggest engine and some upgraded drivetrain components and calling it a day. If that were the case, this Tundra would have easily outrun the entire field of competitors.

After all, it does sport a proper LS-swapped motor under the hood, complete with a whistling supercharger and (probably) all the proper driveline components to send all the power to the sticky tires wrapped around the classic BBS rims.

We really appreciate the last touch, as it shows the owner has plenty of consideration for subtle details. That’s also evidenced by the unassuming presentation (there's a little walkaround at the 1:35 mark in between the quarter-mile runs) and the “Supercharged” signature planted on the back of the truck.

Still, that wasn’t exactly enough to exert forced induction supremacy on the tough opponent roster. First of all, the supercharged Tundra met a red Dodge Challenger—a Demon judging by the low ten-second result. The truck is nowhere near that area, though, as it’s more adept at delivering low 12-second runs, as shown during that and upcoming battles.

Perseverance is always the key to success, although for this Tundra, the latter only came when facing off with another Toyota representative, the A90 Supra. Meanwhile, even dipping into the 11.9-second area proved insufficient when faced with a Mustang, while the Audi RS3 should have gone head-to-head with the Dodge instead of shamelessly smoking the Tundra with its ten-second result. 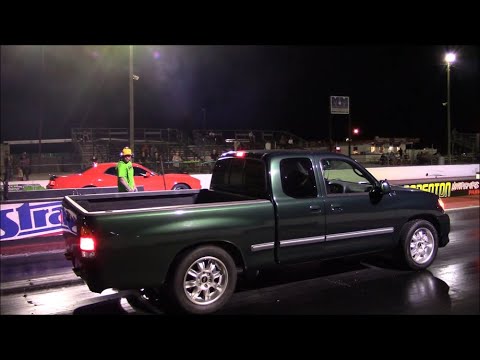