2 Ford Bronco Will Never Get Lost in the Wild, to Have Telenav and SYNC 4

The 2021 Ford Bronco really is the hottest automotive commodity this summer – probably also because its engineers are putting it through its paces across Moab’s well-known Hell's Revenge off-road course. Bronco Nation managed to catch a ride along with the team and are now showing us more footage with the reborn icon being put through its paces on some of the toughest terrains the U.S. has to offer, all in the name of “durability testing.”
12 photos

New day, another Ford Bronco adventure. This time around we are not treated to just a spicy preview on the Escalator of Hell’s Revenge. Nor are we enticed with a quick showdown between the Bronco and its archenemy (aka the Jeep Wrangler). Instead, Bronco Nation is bringing us part one of the full trip across Moab’s renowned Hell’s Revenge trail.

The course is approximately 6.5-mile long and just about anyone can sign up with the local Red-Rock Four-Wheelers club to experience it – though its members clearly recommend it only to the most experienced drivers due to the many hazards present on the terrain. It was only natural that Ford’s engineering team would reach this point as well after previously visiting Jeep’s own backyard on the Rubicon trail.

Interestingly enough, during previous videos of the Moab exploits we caught but fleeting glimpses of the expeditionary force Ford has amassed for this adventure, the footage mostly focusing on one or two specific Broncos (alternatively a 2-door and a 4-door, of course).

The latest one gives us a clearer picture of the cohort of 2021 Ford Bronco models employed by the engineers – we counted at least 9 examples to be part of the caravan.

Actually, during the initial pass-by the video cuts short just as we are heading towards the end of the row of Broncos and unless our eyes are mistaken the final member of the pack is a Jeep Wrangler. More so, during another wide shot of the group we bet there were actually two Unlimited models.

If that is the case (you can check the gallery for yourself and leave your opinion in the comment section) better keep your fingers crossed for more one-on-one Bronco vs. Wrangler action caught by innocent adventurers (aka those not affiliated with the Blue Oval). 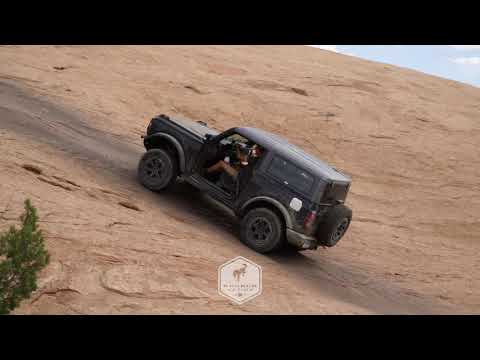