Just like the 1965 Bronco, Ford offered the new model with two or four doors. The two-door version featured a shorter wheelbase and a smaller cabin.

Ford designed the Bronco as a direct competitor for the Jeep Wrangler. The engineering team made the car handle better on the road and took care of what the off-road enthusiasts told them. While the four-door version was made more for a family that might go in the wild, the two-door version was built to conquer the wilderness.

From the outside, the round headlights and the flat grille resembled the image of the 1965 Bronco. The design team imagined a squared design for the car, with rounded corners. The doors and the roof were removable. They could have been stored in the trunk, leaving the car with a roll-cage from the A-pillars to the tailgate and cross members above the passenger area.

Inside, the Bronco featured a mix of digital display and analog dials for the instrument cluster. The design team installed an 8” touch screen display integrated into the dashboard, with an option for a 12” display. On the sides, the grab-handles were very useful for the other occupants to get in or out of the car. The interior was designed to be easy to wash, with rubber floor carpeting and special upholstery. On top of the dashboard, there were few buttons covered with rubber.

The Bronco featured a 2.3-liter turbocharged engine as standard. It was the only version available with a 7-speed manual transmission and a crawl-gear. As an option, the carmaker mated the base engine to a 10-speed automatic as well. The other option was a 2.7-liter that offered 310 hp and mated as standard to the automatic gearbox. 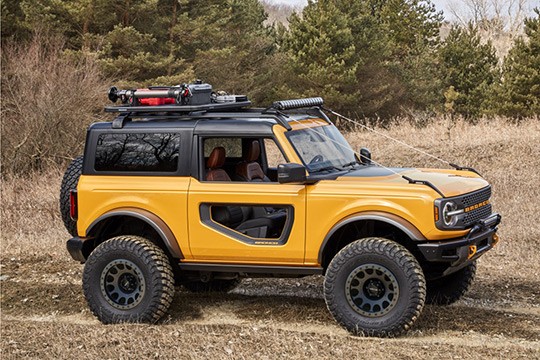