We are almost a year away from seeing the first deliveries of the 2021 Ford Bronco – and that moment will probably also mark the start of the Jeep Wrangler real-life comparison onslaught. Prior to that, certain head-to-head skirmishes are still bound to happen – though we can bet most of them will include company product development teams and carefully closed doors. But from time to time we might get lucky – such is the case here with Bronco’s latest expedition to the Moab in Utah.
8 photos

If you carefully followed the recent exploits of one 2021 Ford Bronco prototype group, you already know the three-vehicle expedition has already tackled with various degrees of success the iconic Sierra Nevada 22-mile long Rubicon Trail.

Then the pack recently moved a few hundred miles to the East to face another mythical Jeep spot – the Utah wonder of Moab.

The Blue Oval seems to enjoy all the unofficial publicity around its three Broncos because so far it has made no effort to conceal their adventures. Major forums such as Bronco Nation and Bronco6G are taking ample opportunity to cover the action. The latter is also responsible for bringing us very fresh footage captured by the Freewheelin_Overland YouTube channel.

According to info provided in the video and on the forum’s page, one hardcore climb at Moab included some hot head-to-head action with a 2-door Bronco, the Jeep Wrangler Rubicon support and tow vehicle (that's right), and one of the two 4-door Broncos. Best of all, the trio makes the climb back to back, with the Jeep captured right in between the two Blue Oval contenders.

Given the 2-door Bronco’s 100.4-inch wheelbase, it is only natural the off-roader made quick work of the climb. As previously discussed, it rides on 33-inch BF Goodrich AT tires and comes equipped with a heavy duty modular front bumper, as well as a 4.46 gear ratio for the automatic transmission.

Next up came the JL-generation Jeep Wrangler Unlimited Rubicon with factory 33-inch tires. Given its 118.4-inch wheelbase it clearly had more work cut out for it, and the first attempt to conquer the hill climb ends without victory. We do not see exactly what happens next, but the video clearly depicts the Wrangler up top when it is time to see the second Bronco tackle the course.

This time around the 4-door, 116.1-inched 4-door Bronco did not break a sweat and managed the climb from the get-go. It is worth mentioning that both the 2-door and the 4-door are Badlands non-Sasquatch models, and the latter also packs a manual transmission and the optional 33-inch Goodyear MTs, along with beadlock wheels and rings. 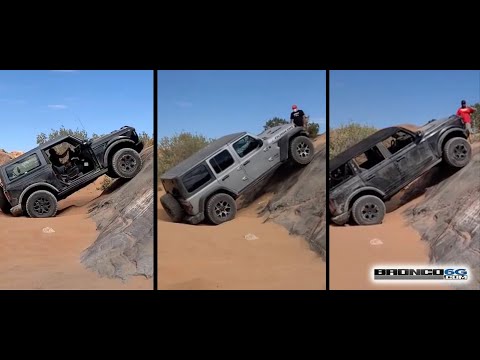