1 1987 Toyota Dolphin Micro-Camper Looks Like a Magic Shack on Wheels, Awaits Your Bidding

A Rare, Possibly Unique Victorian Mobile Photography Studio Is Up for Sale

Since vintage is still king, here’s the most vintagest (*not an actual word, we know) caravan around. It hails back to Victorian times, when it would move around pulled by horses, and should appeal to photography enthusiasts, or maybe to those looking for their next restoration project and a huge challenge.
9 photos

A very rare and quite possibly unique caravan has popped up for sale in the UK, packed with history and with about as much potential, in the right hands. Restored, it could serve as a window into a long-gone past, when photographers would roam the country and take portraits of wealthy tourists. Think of it as a museum display of the time when horsepower meant just that: horse power. Restomodded, it could serve as someone’s next vintage tiny house, to serve whatever purpose desired.

As it is, the caravan is in bad a condition, though Charterhouse Auctioneers & Valuers note that it’s been “lovingly” cared for even whilst abandoned for decades in a field in Wareham, in Dorset, England. It will cross the auction block at the auction house’s upcoming August 5 event, and, despite the poor state it’s in, it’s expected to fetch between £8,000 and £12,000, so approximately $9,710 and $14,500 at the current exchange rate.

This caravan is a mobile photography studio built for and used by famed photographer John Pouncy, who is best known for his work uniting lithography with photography, displayed in the 1857 book Dorsetshire Photographically Illustrated, the first English publication to feature lithographic illustrations. Many of these illustrations were snapped and processed in this caravan, which was his and his son’s mobile studio, and used mostly to roam around the seaside town.

The caravan is still completely original and features a sizable skylight and a glass wall on one side, allowing for plenty of natural light, and sprung wheels. The interior featured a small waiting room and the photo studio, with cupboards on the wall to hold camera gear and all manners of props. A small darkroom was set up to the side of the entrance, with the chemical bay still in place, as well as the hooks for the photos and the fittings for the window blackouts.

The mobile studio has already been restored once, and the seller had plans of doing the same, but never got around to it. They’re hoping that whoever buys it will have the time, the money and the inclination to do so, and maybe in the process honor its impressive past. “This is a fantastic opportunity for someone to acquire what we understand to be a unique piece of Victorian photography history which would make a stunning studio or office,” Richard Bromell says.

Just imagine the bragging rights of the next owner. 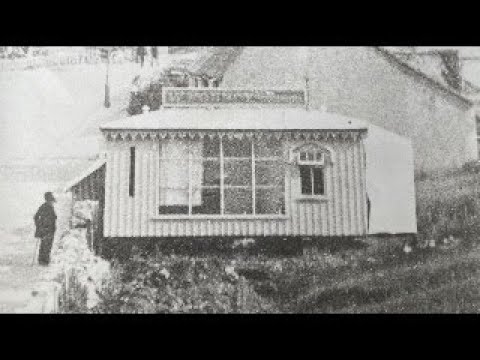