Do you know how some actors have a life-defining role that ultimately blurs the line between their real person and the character they played in the public's mind? I mean, if I showed pictures of Daniel Radcliff and Elijah Wood to one hundred people on the street, I can guarantee you the majority would identify them as Harry Potter and Frodo, and not by their real names.
12 photos

Under normal circumstances, stuntmen (stunt drivers included) are not afflicted by the same problem, and that's because huge efforts are made to hide their true appearance from the viewer's eye so nobody knows what they look like. However, when you spent quite a few years as the mystery racing driver on Top Gear, the world's most successful car-related program (even if your face was indeed covered at all times by a white helmet with a dark visor) becoming nothing short of a cult-like figure in automotive pop culture in the progress, then it's perfectly understandable why people become more than just a little curious about your identity.

Well, for all the other great things he did in his life, Ben Collins will forever be remembered as "the Stig". However, the BBC couldn't have managed to keep the secrecy for so long without some hefty contracts and NDAs, which explains why you won't be hearing explicit references to the white-suited man every time Ben shows in a clip. That and the fact that, while undeniably flattering, I'm sure Ben wouldn't mind putting the Stig years behind him and rebranding as... well, his true self.

In this clip, you'll find him together with Tiff Needell (formerly of Fifth Gear fame) and Paul Woodman trying to decide which of three compact trucks on test is the better choice. None of the combatants – a Ford Ranger, a Mercedes-Benz X-Class, and a Volkswagen Amarok – is particularly new and there are plenty of other names on the market that could claim to be a better choice, but I guess you have to work with what you have.

Besides, both the Amarok and the X-Class offer a rare opportunity in this segment (especially as far as the European market is concerned): 3.0-liter V6 engines, albeit of the turbodiesel kind. Meanwhile, the Ford Ranger is left trailing with a measly 2.0-liter twin-turbo diesel developing 170 hp (that's 88 hp less than the other two).

Judging this type of vehicle by the power it makes is like choosing a workhorse based on the whiteness of its teeth, so the real decider is going to be a set of challenges that all three trucks will have to compete in. Well, a drifting competition on a skid plate doesn't make too much sense, so we're pretty much back to the whiteness of their teeth, I guess.

Luckily, the second trial involves an off-road course, which is a bit more relevant for three all-wheel-drive trucks, though something involving hauling and towing capacity would have felt even more suited. Besides, the Ranger is mysteriously replaced by a Ranger Raptor for this section, a move that does however bring the Ford's price in line with its two competitors.

The conclusion is something we've known for a pretty long time: while more power is always a good thing for most vehicle types - and even more so for pickup trucks - a premium badge and the extra money that comes with it don't really work in this kind of conditions. That makes the affordable Ford Ranger the winner in this comparison. And if you were to spend more, you'd definitely get the Raptor instead of the other two, so it's a Ford win all around. 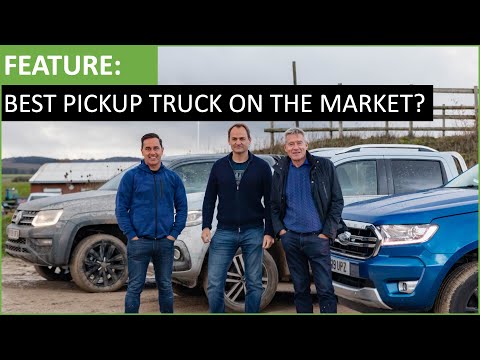