2 The Restoration of This 1965 Ford Mustang Has Already Started, Help Still Needed

Just in case anyone can’t imagine the wide spectrum of possibilities based on Ford’s classic F-Series trucks, I invite you to spend another ten minutes of your life with a 1969 “F-800” after watching this cool DIY restoration process. It’s in a completely different league, but it’s probably just as wonderful.

Anyway, back to the latest video (embedded below) from the Hand Built Cars channel on YouTube, this feature is a bit lengthier. After all, it spans five long years of garage handiwork. And yes, it goes to show that classic Blue Oval truck fans have a knack for the F-Series' fifth generation.

This time around, the focus is on a 1969 F-100 Ranger that needed some five years to return to its former glory and another 18 years to get going under its power! As one might have easily guessed, this project started as a traditional barn find. Well, sort of, since the owner was the one that placed it under a tarp in the parents’ shed a few years after buying it when he turned 16.

Initially, the idea was to just get it going and repair the damage from an accident that had it sidelined for more than 16 years. But, of course, plans flew out the window... and landed onto a full restoration. To return it to its former glory, a replacement 390ci big-block Ford engine and C6 transmission had to be installed. But that was just the proverbial tip of the iceberg.

As always, it’s quite mesmerizing to see what a simple, focused human will can achieve, even if it takes a long time to deliver the desired effect. In this case, a pristine blue/chromed 1969 Ford F-100 Ranger with a beautiful wooden bed and a gray/blue interior that would make any classic car aficionado weep tears of joy! 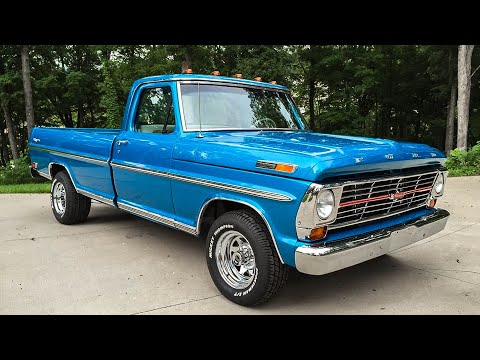