2 Barn-Find 1969 Ford Mustang, Saved After 40 Years, Hides Signs of Life Under the Hood

Blue Oval aficionados rarely can go wrong when a 1969 Mustang is involved. While this Mach 1 Fastback looked great on the outside, once the build project got going, it quickly turned into a rust-bucket rat hole. Then something magical happened.
78 photos

Well, it’s not exactly wizardry. Instead, this Randy Apple Red 2 restomod hero became the owner of a Builder’s Choice Award at the 2017 Goodguys event in Raleigh, North Carolina through arduous work and dedication. Allegedly, an estimated 3,000 hours got invested solely in turning the rust bucket’s exterior into a show-worthy appearance. And that’s just the custom bodywork!

According to the good folks over at the Hand Built Cars channel on YouTube, the transformation was done by GT Graphics and Customs in Franklin, North Carolina. It naturally included quite a bit of hand fabrication, along with multiple coats of PPG Randy Apple Red 2 to achieve the desired fit and shine.

But reviving the interior (with black leather and OEM seats) and exterior of the classic Mustang was just part of the process. As always, one can go behind the scenes thanks to HBC’s video (embedded below) that never fails to mesmerize with exquisite attention to detail. Whether it’s done by someone in his own garage or at a specialty shop, the entire ordeal is always a marvelous feat of both engineering and human will.

Anyway, back on ‘69 Mustang focus, the Blue Oval also got a traditional choice of powertrain among restomod aficionados. It’s a 5.0-liter Coyote V8 engine, complete with a push-button 4R70W automatic transmission, and a 3.70 limited-slip differential.

Judging by the rest of the technical specifications, which include perks such as an independent front suspension, Heidts Pro-G four-link rear setup, Wilwood brakes, and a roaring exhaust, this ‘Stang was also rebuilt to be driven. Not just to win awards while on static display! 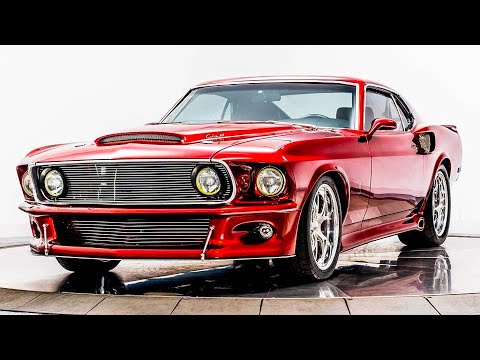