2 Classic Pontiac GTO Gets (Some) Imagined Restomod Goals, Feels Happy to Be Slammed

A couple of classic Pontiacs in original, excellent condition is quite a sight in its own right. But when those cars happened to be a super-rare 1970 GTO and a Firebird TATA, that's a World Series-winning home run.

Dennis Collins, the famous classic car rescuer who documents his automotive knight errant adventures on YouTube, ran into this spectacularly attractive pair of American big-block pride. Owned by the same man, the vehicles are in surprisingly good condition.

The 1979 Firebird TransAm Tenth Anniversary model (or TATA, for short) "looks darn good," one viewer commented. And we must bow in admission; the beautiful Pontiac is nothing short of showroom display excellence once more.

Why once more? Because the car has been an exhibit example for 23 years, from 1979 until 2002, in a Chevrolet dealership. Subsequently bought and maintained in excellent condition, even if it became a driver's car, the TransAm had a remarkable forgiving road life for the following decade.

The 403 ci (6.6 liters) engine and automatic transmission were the popular choices back in the day, and Pontiac sold twice as many automatics than the four-speed manual gearbox-equipped TATAs. A grand total of 7,500 left the production line, with 2,500 having the floor stick lever.

This Firebird is a low mileage (5,511 miles or 8,870 kilometers) car and retains all the factory-installed extras. Which, by the way, stands for the whole package available in 1979. That includes the air-conditioning (which happens to work on this vehicle - a rare and satisfactory bonus).

As two previous owners duly documented, the '79 Firebird also sports all the factory flaws – proof of poor quality control standards specific to that period. Fortunately, those loose ends did not extend in the engine bay.

So, it's no surprise that the V8 Oldsmobile engine runs like a dream (listen to it in the video below). And, because it has the Turbo Hydramatic 350 three-speed automatic gearbox, it also has cruise control. With that option included, this TransAm checks every available factory extra the Firebird series had to offer.

It is now time to turn our attention to the best half of the story, the 1970 Pontiac GTO that shares the garage with the Firebird. The convertible Ram Air III-powered four-speed manual is a truly rare – if not unique – find, especially in such a good condition as the one here.

This Baja Gold over sandalwood interior '70 GTO Convertible also crammed all optional extras, such as air-con and lots of power. Please don't jump to conclusions yet; we are talking about power steering, power brakes, power windows, and power soft-top.

Alright, now you can jump to the proper power-related conclusions. The numbers-matching WS4 400 ci (6.5 liters) V8 Ram Air III under the hood was the most potent option for 1970 GTO, with a rating of 366 hp. However, this example sat in the garage for a solid 18 years. While not abandoned, it does need a bit of elbow-greased TLC to make it run.

Reasonably rare among convertible GTOs from the 1970 model year line, just 174 got the Ram Air III plant coupled to a Muncie M20 four-speed manual. Out of the 174, 22 came with air conditioning. This Dennis Collins find may very well be a one-of-one, given the vehicle's color combination and extended options package.

Unlike his garage neighbor TransAm, the Pontiac GTO wasn't born to pace a race but to be the race. Generally considered the quintessential muscle car of that glorious era, the GTO spurred the interest in the high-performance, big V8 engine automobiles.

Notably, the low-ratio four-speed manual proved to be the drag strip king's secret weapon, with the 400 Ram Air taking on just about anyone. Most often than not, it put up a good fight and won on many occasions. With an experienced driver behind the wheel, the temperamental GTO would blast the quarter mile in about 14 seconds, topping a speed of 100 mph (160 kph).

However, the compromise for that race glory was a rather challenging low-speed driving experience (the 400 Ram Air idled quite rudely for some tastes) and poor mileage. Under nine miles per gallon (upwards of 26 liters/100 kilometers) was quite a nuisance, even for a car with a big engine.

Despite being one of Pontiac's finest GTOs, the 1970 model was on a popularity-losing streak. Not just that model, though, as all muscle cars were facing declining buyer interest. Insurance prices gradually drove the desirability factor lower and lower, and the big-displacement V8s were among the first to suffer the consequences. 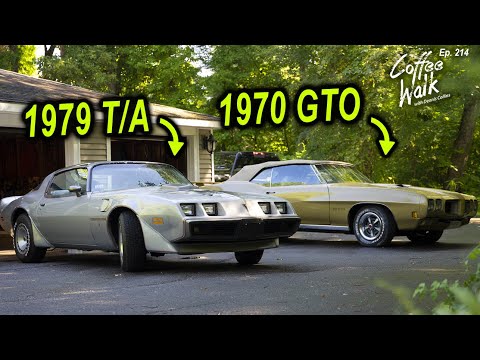