Pontiac introduced the Solstice Roadster as the American cousin for the European Opel GT and, five years later, it transformed it into a coupe.

With the world financial crisis already happening, GM tried its best to keep its engine running and offered the Solstice Coupe as a four-season sports car. In those times, the Solstice Roadster was the best-selling roadster on the U.S. market, and the carmaker tried to keep the brand alive. It was the last Pontiac, and its production lasted only a few months.

At the front, the car shared its front fascia with its roadster sibling and sported some parts from other GM vehicles, such as the fog lights carried over from Pontiac Grand Prix. Since the car was a targa, the carmaker just took the same chassis from the roadster and built a greenhouse with a removable roof, which couldn't be stored in the car. At the back, a glass liftgate covered the trunk large enough for a medium-sized backpack.

GM tried to make the car as cheap as possible and carried over many parts from its parts bin. It took parts from Chevrolet Cobalt, Hummer H3, Pontiac Grand Prix, Cadillac XLR, and the seats from the previous generation of the Opel/Vauxhall Corsa. It looked like it was a car built by accountants for small-sized people who liked clothes with lots of pockets since there were almost no storage bins inside the cabin.

Under the hood, Pontiac installed a choice of two engines: a 2.4-liter naturally aspirated four-pot and a turbocharged 2.0-liter carried over from Opel. Both were paired to a Hummer H3, a five-speed gearbox that sent the power to the rear differential taken from a Cadillac CTS. A five-speed automatic (from Cadillac SRX) was on the options list. 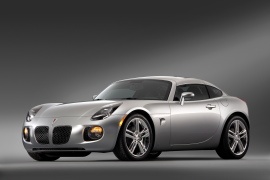