As far as mid-size utility vehicles with three-row seating are concerned, U.S. motorists have plenty to choose from. The CX-9 is pretty good bang for the buck at $34,160 excluding taxes, and those who need a little more luxury can always pick the $47,200 MDX over the aforementioned Mazda.
44 photos

Sam CarLegion had the opportunity of testing both, and the differences are pretty considerable over the quarter-mile showdown. Despite having a rather old six-speed automatic that doesn’t feature a sportier mode, the CX-9 hooks up better off the line. Unfortunately for Mazda, the family-hauling crossover can’t keep up with the more potent - but still very slow - Acura MDX.

Even though it flaunts a 10-speed automatic with sport mode, the MDX gets going pretty slow on the second run. The Acura’s transmission comes into its own from a roll, kicking down very fast for a luxury-oriented crossover.

Sam CarLegion underlines how outdated the Mazda feels in the real world, but are you surprised? It’s a 2016 design that’s been hardly updated in the past five years while the MDX is a ground-up redesign for the 2022 model year. The Acura’s Global Light Truck Platform also needs to be mentioned because it boasts double-wishbone suspension just like a 992 Porsche 911 GT3.

The man behind the wheel is especially impressed by the interior space and quality of the MDX, and it’s only natural if you remember how much of a pricing difference there is between it and the CX-9 in entry-level spec.

When all is said and done, there’s a glimmer of hope for Mazda loyalists because the automaker’s Large Architecture will debut in the next CX-5 with RWD/AWD, straight-six mills, and a much nicer interior. As such, the next CX-9 will be a much worthier rival to the Honda-badged sibling of the MDX. 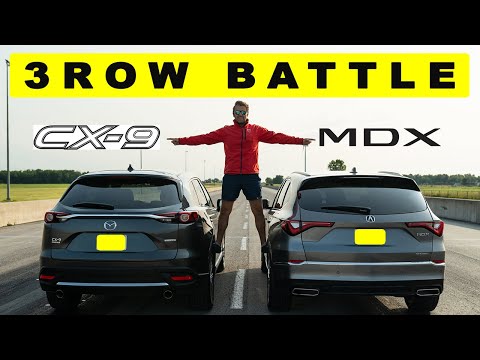