Acura unveiled the third generation of the RDX at the 2018 New York International Auto Show and went from bald to the bold design.

Honda's premium brand Acura was an excellent choice for the premium SUV compact segment. The carmaker entirely made its design in the U.S., and that was a big step forward. It also showcased the trend for future Acura products.

From the outside, the grille looked dynamic. Besides its watermelon-sized badge, the grille sported a 3D mesh that looked like Star Trek warp lines. Its angular Jewel Eye headlights used seven LEDs instead of five as on its predecessor. The raked windshield continued with a slightly sloped-down roofline ended into a raked-forward windscreen in the back.

Inside, the carmaker installed an NSX-inspired instrument panel with two large dials that flanked a center LCD and two digital gauges for the fuel level and coolant temperature. On top of the center stack, Honda installed a 10.2" full-HD center display accessed via a touch-pad mounted high atop the center console. Fortunately, the carmaker used a physical volume turn-knob on the driver's side. The high-bolstered front bucket seats provided good support while high-speed cornering, while the flat-folding rear bench increased the trunk size from 28.9 cu-ft (818 liters) to a cavernous 58.9 cu-ft (1,668 liters) with the seatback folded.

Under the hood, the carmaker installed a 2.0-liter turbocharged unit paired to the SH-AWD system via a ten-speed automatic gearbox. 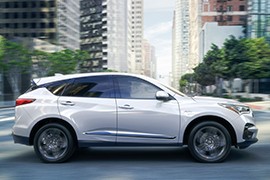