3 Chevrolet Cobalt Runs 4s, It's Probably the Quickest Out There

Have you ever felt like the Hellcat 6.2-liter V8 has too little weight to carry around in the Dodge Charger and Challenger, or even in the Jeep Grand Cherokee Trackhawk? No problem, the Mopar people have you covered with the scale destroyers that are the 2021 Ram 1500 TRX and the Dodge Durango Hellcat.
6 photos

When it comes to a drag race between the super-truck and the uber-SUV, the only question that needs to be asked is "why not?". After all, these slabs of America pack in excess of 1,400 hp combined.

Then again, we're here to deliver some answers, as a Durango Hellcat and a T-Rex recently got together for a spicy night of competitive sprinting. Speaking of which, please remember to steer clear of such street fights and head over to the drag strip when you feel like racing.

While the usual shenanigans of the sort stick to roll racing, since that puts less stress on the vehicles and allows the drivers to get on with their battle quicker, the confrontation we have here is different.

Sure, these beasts duked it out while on the move, but they also fought using a standing start. While the safety benefits brought by the drag strip are obvious, there are multiple reasons for visiting the said location. For one,  the Christmas Tree increases the chances of an even start. And, as the piece of footage at the bottom of the page shows, this shouldn't be taken lightly—we'll thank YouTuber Mod2Fame for the shenanigans.

Nevertheless, when talking about the rolling races, we have to keep in mind that while the bed-gifted machine is limited to 117 mph (189 kph), its three-row opponent can party all the way to 180 mph (290 kph).

As for the aural side of the battle, we invite you to turn up the volume and be the judge of that (there's a rev battle at the 4:46 timestamp, just before the races). 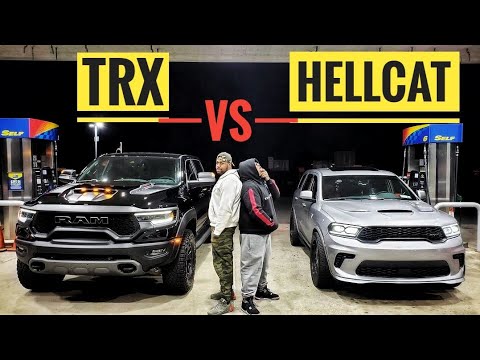