3 1972 Ford Mustang Sprint Shows a Behind for the Ages

5 Hurry Up and You Could Snatch This 1968 Ford Mustang Project Car for Just $8,500
Car video reviews:
Coverstory

Not endorsed by the Ford Motor Company or Polaris Industries, the following drag race is humiliating for the galloping horse on the front of the Mustang Mach-E. The question is, why did the e-crossover lose?
26 photos

There’s also the matter of tires, namely 19-inch Michelin Primacys and Maxxis Carnivore off-road rubber shoes. The street-going tires developed specifically for low rolling resistance hamper down the performance of the sport utility vehicle, which is all the more disappointing because the synchronous motors provide quasi-instantaneous torque to all four wheels.

At 26 degrees Fahrenheit or -3 degrees Celsius, the RZR Pro XP 4 Premium shoots off the line better. 60 miles per hour (97 kilometers per hour) takes 5.1 compared to 6.0 seconds flat, and by the end of the race, the twin-cylinder Polaris appears to be a car length ahead of the Mustang Mach-E.

Manufactured in Mexico instead of the United States where the RZR is made, the Mustang Mach-E retails at $42,895 for the base trim level with rear-wheel drive and the smaller of two batteries. Add the federal tax credit and local incentives to the mix, and it’s easy to understand why the Blue Oval has no trouble selling this Escape-based crossover with Mustang styling. 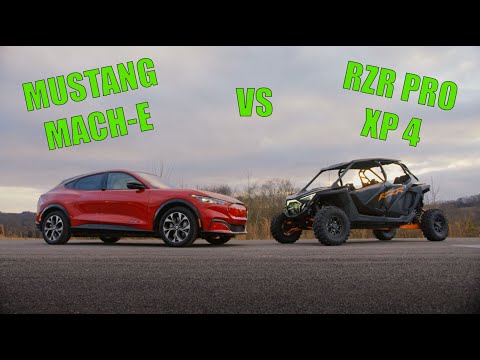