5 A Look at Michael Schumacher’s Best Car and How It Dominated the 2002 F1 Season
Car video reviews:
Up Next

2021 Ford Mustang Mach-E Reviewed Against Tesla Model 3, Both Are Brilliant

Although the Mustang Mach-E competes with the Model Y, this review is a showdown between the electric Mustang that isn’t a Mustang and a Model 3. Rory Reid can’t pick a winner between them, but if you insist, he’s much obliged to confirm that his pick is the Blue Oval crossover.
26 photos

During the filming of the review, Rory and company managed to squeeze out between 3 to 4 miles per kWh from the Ford and 5 to 6 miles per kWh from the Tesla. Described as exceptional family cars, these EVs are attractive in terms of styling as well, although there are a few issues with the Model 3. Like its siblings, this car comes with standard panel gaps.

The Mustang Mach-E, however, appeals to a wider customer pool because of the body style and superior build quality. As far as the interior is concerned, Rory prefers the more traditional cabin of the Ford over the minimalist design of the Model 3 that takes some time to get used to. One of Tesla’s quirky particularities is the touchscreen-operated glovebox.

In the practicality department, the partitioned frunk of the Mustang Mach-E may put off a few customers, although the Ford has a distinct advantage in rear-passenger legroom and headroom. The Tesla Model 3, by comparison, features an elevated position for the rear occupants’ legs.

On the move, Tesla's electric sedan gets the bigger thumbs up for sporty handling and a more comfortable ride. The Mustang Mach-E may feature more insulation, but the suspension fails to settle down even on nice roads. 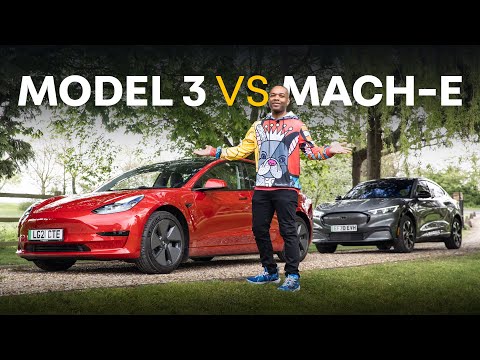