3 Tesla Model 3 Performance Gets the European OK, Slides Its Way to the Autobahn

Some matchups on the drag strip are truly befuddling. Literally, the worst type of sports car or muscle car you could throw at something like a Tesla Model 3 Performance is a rear-wheel drive vehicle with not enough power and a manual transmission.
7 photos

According to the uploader, the Model 3 Performance in question is a 2019 car, which means its dual-motor all-wheel drive system is providing the wheels with a total of 340 kW (450 hp). Had this been a newer version, it would have had more power.

Even so, we’re still dealing with an EV capable of accelerating to 60 mph (97 kph) in roughly 3.1 seconds, which let’s face it, would still net you a 10/10 acceleration rating no matter what standards you're using to grade a car’s performance.

To make matters worse, the Mustang was a manual transmission model, which definitely makes it harder for the driver to keep up with something like a Model 3 Performance. It doesn’t even matter how good the driver is at shifting gears, you’re not going to perform better than a car that literally doesn’t have to shift at all. 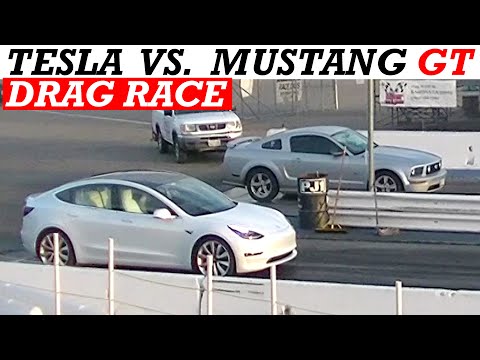