3 Tesla Is Building Something in the UK, Elon Musk Flies In to Check It Out

5 Four Protesters Sit on a Tesla's Glass Roof, But Not Why You Might Think
Car video reviews:
Coverstory

If something can be hacked, at some point, it will be – hacking hasn’t been here long enough for this to be included in the laws of the universe, but it should be. And despite Elon Musk's attempts by sending them on a trip around the Solar System and beyond, Teslas are still very much part of this universe.
1 photo
Teslas have been hacked before, and if there wasn't such a supportive community built around the brand, it would have probably happened a lot more. That's because the company has turned releasing software-locked features into a habit lately, and you can almost feel the owners' itch to unlock the full potential of their cars without parting with thousands of dollars. You have the car, you paid for it, so you kind of feel entitled to do so. Even though you're technically not.

But tuning the performance of a vehicle isn't something new, it's been around for ages. It just so happens that Teslas don't require bigger turbos and less restrictive exhaust systems, but only some software tinkering. Enter Electrified Garage, a company that offers a three-stage performance upgrade for the Model 3 that will make any dual-motor version as quick - if not quicker - than the standard Performance version.

Tesla obviously doesn't like that because it makes its scaling system useless. Why would people pay $7,000 extra for the Performance model when the Long Range AWD can get the same acceleration specs with only a fraction of the cost? They wouldn't, which is why pulling anything like this will void the vehicle's warranty which might deter some owners from trying.

Luckily, it didn't prove a strong enough hindrance for the owner of the blue Model 3 in the clip below, which is why we now know the Long Range AWD can get 0-60 mph times to rival those of the Performance version. In fact, the Ghost Model 3 - the pet name for the modified EV - couldn't be beaten by the Performance version in the ad-hoc drag races staged to showcase the improved acceleration. Granted, the P variant had one extra person on board, but even so the increase in performance is staggering.

It's best if we put it in numbers, so here it goes. Out of a few runs, the Long Range AWD had the best registered 0-60 mph (97 kph) time at 4.4 seconds. Once it became the Ghost Model 3, that changed to 3.38 seconds, so the upgrade essentially shaved a whole second off its naught-to-sixty time, which isn't bad at all for a bit of messing around with the car's software. 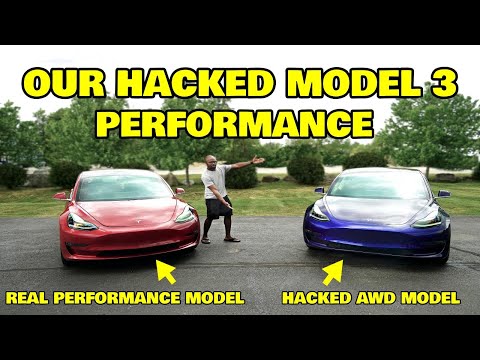