Claiming a Car in Texas and Utah Is Difficult, Might Be Worth It

When it comes to some of these drag racing videos, certain matchups really can be difficult to understand. Such is the case here, where we’ve got a 2019 Tesla Model 3 Performance and a 2019 Corvette Stingray, which according to the uploader has a supercharger.
7 photos

That’s great. The supercharger I mean. Maybe it’s even putting down as much power as a Z06 – but that’s not the problem. The downfall of that Corvette is the fact that it has a manual gearbox and watching it trying to keep up with the Tesla in a straight line is downright painful. Every time the driver changes gears, the ICE-powered supercar loses more ground.

Can you imagine if it was still putting down its stock 455 hp and 460 lb-ft (620 Nm) of torque? Actually, it’s tough to imagine this race going worse than it already did for the Vette. The two only raced over a 1/8-mile distance and the Tesla won by almost a full second, which is what we call a dominant performance. That being said, GM’s eight-speed 8L90 automatic gearbox would have been helpful here, rather than the seven-speed Tremec TR-6070 manual.

Maybe if they raced over a quarter mile or a full mile, the result could have been a little more competitive, shall we say. The muscle car would have absolutely carried more speed than the EV over a longer distance – it was even going faster as they flew past the 1/8-mile mark.

As for whether the result would have been the same if this was a 2021 Model 3 Performance, the answer is absolutely, yes. In fact, the difference between the two cars might have been even greater seen as how the 2021 version of the Tesla is slightly quicker to 60 mph than the 2019 model. The latter, by the way, has 450 hp whereas the newer car comes with 480 hp. 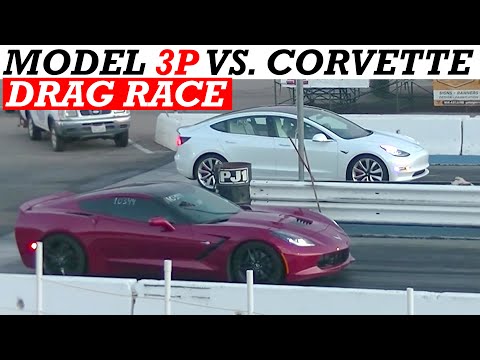