Tesla Model 3 Performance Gets the European OK, Slides Its Way to the Autobahn

Tesla is going to split opinions everywhere in the world, not just the U.S., and that's because it's meant to be disruptive. Its ultimate goal is to make internal combustion engines in cars obsolete, and that's bound to upset some people.
7 photos

The fact the first cars made by the then-emerging company weren't exactly great on all levels - while still offering the best EV powertrain at the time - didn't help, particularly in Europe where customers tend to hold build quality in high regards. And we all know that quality wasn't one of Tesla's strong points early on.

In fact, AutoTopNL's Max says the first time he drove a Tesla felt it was like "a disposable lighter". Needless to say, he didn't like it, which goes to show just how important it is in some markets to offer a well-balanced product instead of just a car with great acceleration and range. People will gladly sacrifice those two for a bit more comfort and perceived quality.

Fast-forward to 2021, though, and the same Max admits he's impressed by the progress that Tesla made. He says that in his home country, the Netherlands, you'll see a Model 3 everywhere you look. "They are like cockroaches", he says, and that sed to irritate him since he felt there were other options people should have considered.

After driving the 2021 Tesla Model 3 Performance, he gets it. He says the improvement is palpable, both in terms of materials used and overall build quality. However, it's still the performance that steals the show, with an acceleration run prompting him to utter something you're not very likely to hear in other cars: "Surprised myself there!".

With the regen set to the highest position, the throttle pedal is described as an "on and off switch". He says that accelerating and lifting off too much can make you physically sick, and we see no reason to doubt it. And if that doesn't do it, then the tail-happy attitude you get with the drift mode active should more than take care of it, though the car remains easy to control in any situation.

Since this is an AutoTopNL review, we all know what to expect: a top speed run on the Autobahn. Max is always happy to deliver, and he's lucky enough to deal with a pretty empty section of the German highway. The Model 3 refuses to go over 161 mph (259 kph), which just happens to be its official top speed as well. However, the further the battery drains, the lower the vehicle's software sets the top speed cap, so it's not actually a fixed number. 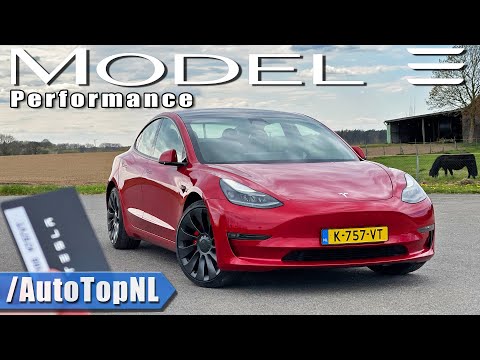