2 Tesla Model 3 Black Market Alive, You Can Now Get Ripped Off at 3x List Price

3 Tesla Model 3 vs Model S vs Model X: Front and Back Seat Edition

For reasons that couldn't be any more obvious at this time, Tesla chose to kick off the production of its first mass-market product, the Model 3 electric sedan, with the single-motor version as opposed to the performance one that uses two.
1 photo
We say "obvious" because it turns out the company is struggling with cars that have one propulsion unit, so imagine the complete fiasco if, for some reason, it decided to start with the dual-motors. Tesla fell dramatically short of its initial production targets and its chances of making amends and catching up by the end of the year look slim.

However, with all resources funneled toward getting the Model 3 out of "production hell," it looks like Tesla found the time to take a go-faster version of the sedan out for testing. Mind you, we can't really be sure this car really has one motor over each axle since there's no way to tell from the outside, but the author of the clip believes the red calipers are a clear giveaway.

Well, they usually are the sign of a sportier vehicle, so there is some sense in that assumption, but you can't hang an entire argumentation on a thin layer of paint. That's where the second clue comes in.

Coming out of the banked bend, the Model 3 stops right in front of the camera. "Staged," you might think, "why else would it stop there?" Well, maybe that's where the straight bit begins, and acceleration is best observed when the steering wheel remains dead-centered?

The angle makes it hard to approximate whether the EV hits 60 mph in 5.1 seconds (the official time for the long-range RWD Model 3) or quicker. But if this is indeed the performance version, then one thing is clear: the Model S and Model X have nothing to fear from their little brother. That launch looked nowhere near as impressive as that of a Model S P100D. Which, admittedly, is probably going to be more than twice as expensive. 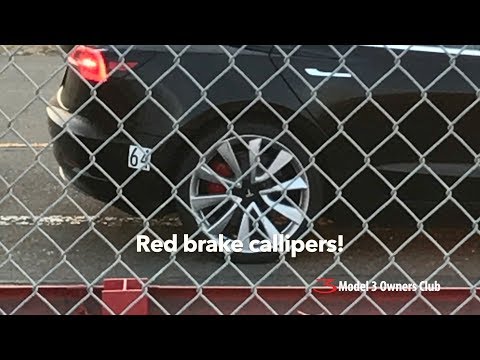