We are certain that during the long-running Ford Era “What The Truck?” series, the mild-mannered host Solomon Lunger has seen a lot of cool and potentially scary Blue Oval creations. But this “luxury pre-runner” that once lived a quiet life as a 1978 Ford F-250 Ranger Supercab is certainly something else. So, instead of an average Dentside, he’s now faced with a full-blown off-road monster... that somehow remained street-legal despite all the crazy modifications.
23 photos

According to the story shared by Trophy Truck expert Kyle Craft, the 1978 F-250 Ranger (which now has a ‘73 front clip and a missing left fender) was picked up roughly four years ago for a “little pre-runner project” with an LS swap and a cage inside. But his dad came to him one day and said, “let’s do this right,” so the budget went up “a bit.” Now the truck proudly wears “F250 Custom” badges, and it certainly went as far and wild as possible.

So, under the hood now resides a 575ci big-block that can be seen at the 7:20 mark when it’s time for the customary peek under the lightweight hood. It was chosen specifically because it carries the needed “backup parts for my race trucks” and bodes well alongside the 4L80E transmission, big shocks, and coilovers. Again, all these are the same parts as seen on the Trophy Trucks, including the nine-inch rear end...

What else is there? Oh, let’s not forget about the 40-inch tires, beadlock wheels, and the fact that it makes on 91 octane gas “just” 850 horsepower... as it was “detuned” for safety reasons. Yep, they’re casually discussing the fact that on race fuel it would deliver over 1,000 hp. Nothing to worry about since just about everything is custom – including the fiberglass body, the bespoke high beams, or the rear end as well as the four links.

Hurry up, have a look at the interior from the 4:35 mark to see the modern pre-runner cockpit that has all the electronics and creature comforts of the 21st century, including heated seats and cruise control. That way, we can get to the best part of the video (embedded below). That wouldn’t be the peek under the bed at the 6:05 mark, nor the engine startup (from 9:38) and initially “tame” ride along. Instead, it’s the monster exhibition part that kicks off at 13:02 to scare the bejesus out of Lunger... 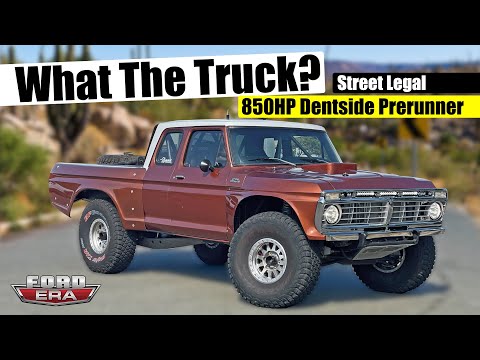