Home > News > Custom Cars
Aurel Niculescu
Didn’t we just discuss how the classic truck community really loves the 1967 to 1972 model year F-Series? So, back then we talked about a cool 1968 Ford F-250 three-quarters ton Bumpside Crew Cab. And it wasn’t just the vintage looks of the original Lunar Green paintjob that got us hooked, it was also the controversial 1992 Dodge Ram chassis and 1997 12-valve Cummins diesel swap that sealed the deal.
33 photos

Now it’s probably the right time to appease the Dodge Ram fans and remind them of the recent incident when one of their beloved pickup trucks pulled a superhero move by towing a fully loaded, wood-carrying broken semi out of a busy intersection. No worries, we have something for the Blue Oval crowd as well, because we love everything related to the automotive world and feel that diversity really spices things up.

So, for the latest episode of the “What The Truck?” series on Solomon Lunger’s Ford Era channel on YouTube, there’s another fifth-generation F-Series that’s a Ford through and through. Well, maybe except for the nickname, because dubbing it “Project F-Word” clearly shouldn't make the Blue Oval cut. But, of course, it’s the owner’s choice... just like it was his bidding as to what mods should be hidden under the patina-infused “classic” design.

As far as we can tell, this could easily qualify as a Pro-Touring restomod... if not for the fact that we’re dealing with a truck and not a muscle car. But, of course, if this was just another customized F-100 it might have ended up boring and unseasoned. Instead, now the world is dealing with a Ford Performance Gen 3 Aluminator Coyote crate engine (take a peek at 4:40) that was mated to a Silver Sport Transmissions Tremec T56 Magnum swap kit, as well as a Strange Engineering 9-inch rear end.

That’s far from being all, as shown by the cool exhaust sound (owed to the Holley Hooker Headers and Flowmaster FlowFX mufflers) or by the interior details (at the 14:25 mark) which include creature comforts such as the Vintage Air A/C, a removable (!) Momo steering wheel, or the Performance Productions Dakota Digital instrument cluster. All in all, quite a few nasty surprises are hiding under the beat-down appearance... which is always a worthy cause for a celebratory burnout and donut! 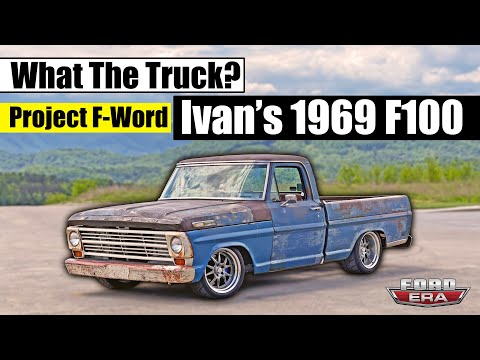