3 Suicide-Door 1985 Ford F-150 Runs Everything Backwards, Including the Burnouts

Drag racers traditionally use burnouts to pre-heat the car’s tires for better grip and control. Donuts are halfway between burnouts and classic drifting. And both are traditionally used to put on a cool show by sometimes skilled, other times (fully) incompetent drivers.
28 photos

Everyone loves the experts and makes fun of the fails, but these old-school Ford F-100 trucks are a bit next level in the best possible way. The reason we see a whole bunch of older and younger F-100 pickup trucks is quite easy to understand, as the cool and mild-tempered Solomon Lunger host of the Ford Era YouTube channel accompanied them to cover The Grand National F-100 Show.

Just in case you missed what happened between May 13th and 15th in Pigeon Forge, Tennessee, we’ve also embedded below a second video that features drone footage coverage of the largest classic Ford pickup truck event in the world.

Now, back to the bunch of F-100 aficionados, which according to the description, decided to celebrate the end of the show with a cool smoke afterparty. There were several dozens of trucks (and even some cars) in attendance, and a host of them delivered the entertainment for the audience.

Yes, we know that it’s basically pointless to burn the rubber to the point of causing the amount of smoke you’d expect from a huge campfire, but when the drivers and vehicles performing this fun activity know what they’re doing, it almost turns into some sort of mystic arts display.

Just take a look at the series of trucks performing this glorious smoke show and say it isn’t so. Some of them burn the rubber so hard that by the end of the performance, they simply disappear out of sight and make us wonder how on Earth does the driver know where the F-100 is going. And it’s even more enticing when seeing these old trucks that sport various degrees of patina do the donuts like a 21st-century drift car.

By the way, there was one particular F-100 that came out on top, a neon-lit rusty Ford that was also bagged and dropped all the way down. It performs both a dramatic solo show and a double truck smoke performance from the 5:27 mark. Coincidentally, that was just before the police arrived to get them all going on a cruise instead. 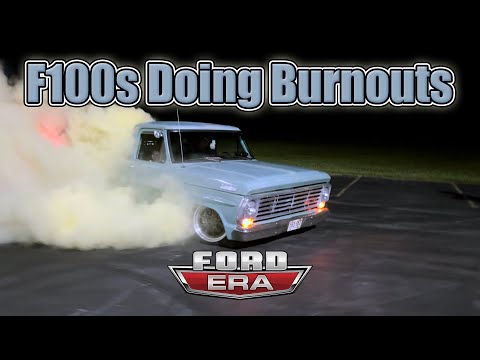 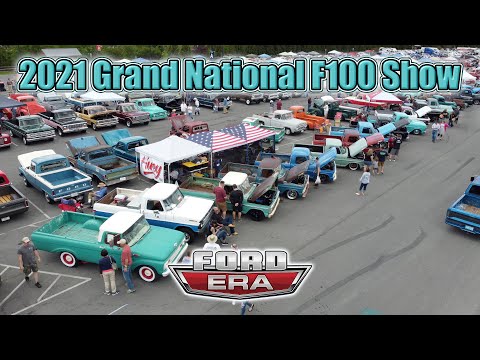 Editor's note: Cool as it may be, this little show isn't something we condone, so please keep such activities safe, organized, and off public roads.