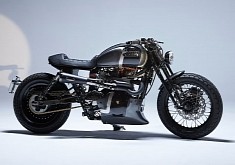 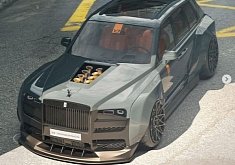 Stanced Rolls-Royce Cullinan Looks Like a Fancy Brick, Has a V8

Home > News > Autoevolution's Limited Edition Month
Ever since Henry Ford made the automobile a common sight more than a century ago, we’ve gotten used to seeing multiple examples of the same thing roaming the roads. That's because Ford’s major innovation was the assembly line, a place where exact same copies of the exact same thing can be produced.

Assembly lines have been the driving force of everything humans have made since, from automobiles to bikes, boats, airplanes, watches and planes. And that’s great, because assembly lines ensure reasonable prices, decent quality, and decent overall products.

But in some cases, decent is exactly what’s wrong with things. After all, what’s the point in having something, if everybody else has the exact same thing?

Sometime in our past, someone decided that, from time to time and for whatever reason, it’s good for the main product line to deviate from its usual self. That’s how special and limited editions were born into this world, bringing a touch of uniqueness to both product and owner. Nowadays, manufacturers of whatever release special versions of their products for a variety of reasons, ranging from corporate pride to the need to celebrate something.

We here at autoevolution deal with cars and bikes, but also boats, planes and submarines, among others, and that’s what we usually do. This April, we’ve decided to deviate a bit from norm as well, and we’ll try to honor over the coming four weeks, first and foremost, those special products we see come to light from time to time.

29 Apr 2022, 21:22 UTC / Can this be considered the mother of all barn finds? We wouldn’t rush to call it that, but this Caddy sure is something impressive. It has quite a story

Want a Limited-Edition Timepiece Built Out of Concrete? Celebrates the Year of the Tiger

Porsche Carrera GT Hits the Track for the First Time, Goes on the Nurburgring

29 Apr 2022, 18:57 UTC / If you do not know who lives in a pineapple under the sea, you will not figure out why they are the face behind the wheel of this Porsche Carrera GT

29 Apr 2022, 01:33 UTC / The GAZ Chaika was Soviet Communism's answer to Cadillac or Rolls-Royce, the decadent capitalist companies that Stalin himself only wished he could control.

28 Apr 2022, 21:13 UTC / Buick's most luxurious offering for 1958, the Limited was more expensive than a Cadillac Series 62. It was discontinued after only a year in showrooms

28 Apr 2022, 14:41 UTC / Powered by the Avanti's supercharged 289 V8, the Studebaker Super Lark brought big muscle to the compact market long before Chevrolet and Dodge did

2023 Porsche 911 Sport Classic Has the Ducktail Spoiler, It's Turbocharged and Manual Only

Brand New Lucid Air Dream Burns to a Crisp, Together With the Carrier Truck It Sat On

27 Apr 2022, 05:52 UTC / Firefighters struggled for 4 hours to put out the blaze on the battery pack. An investigation is underway to determine the cause of the fire

27 Apr 2022, 05:01 UTC / n the simplest terms, the original Eddie Bauer Edition Ford Explorer based on the UN46 platform was a cosmetical trim package exclusive to the high-end XLT.

26 Apr 2022, 22:49 UTC / With an HQ only a short bullet-train trip away from Nintendo's, it makes sense that the two parties had the wherewithal to make this partnership happen

26 Apr 2022, 19:29 UTC / Designed by famous American fashion designer Bill Blass, this Lincoln Continental was one of the fanciest coupes of the late 1970s

This Street-Legal, Rally-Bred SUV Is the Mitsubishi Evo That You Probably Forgot About

25 Apr 2022, 20:55 UTC / You don’t see this happening every day. A hypercar like no other was just put up for sale and immediately attracted the big bucks

1965 Shelby 427 Competition Cobra Is One of Only 23 Built, Selling at No Reserve

25 Apr 2022, 13:24 UTC / Imagine getting the chance to drive an extremely rare supercar with racecar genes on a wet racetrack. It is valued at almost $2 million and has a reputation

Stun Cyclists With a $4,500 Carbon Fiber Aora Frame. Double That for a Complete Build

1960 AC Greyhound Found Under Piles of Junk Gets a Glow-Up, Is a True Sleeping Beauty

23 Apr 2022, 03:47 UTC / A sympathetically restored AC 2+2 Greyhound that spend four decades covered in junk will be crossing the auction block on May 28, probably fetch a fortune