When it comes to Mitsubishi-badged homologation specials, the Lancer-derived Evo sedan is a legend that everyone has heard about. In addition, the Japanese manufacturer applied the same high-performance treatment to a short wheelbase Pajero 25 years ago.

This Street-Legal, Rally-Bred SUV Is the Mitsubishi Evo That You Probably Forgot About

Today, Mitsubishi is a shadow of its former self, having given up on the world of motorsport, discontinued its most popular models, and concentrated all its efforts on developing some uninspiring vehicles. It’s been seven years since the last Evo X left the assembly line, the Eclipse nameplate - once used to market a terrific sports car - is now employed by a crossover, and the current model lineup is depressingly monotonous, to say the least.

However, back in the 1990s and 2000s, things were completely different. Mitsubishi used to build awesome vehicles and was a force to be reckoned with in the World Rally Championship (WRC), as well as the Paris Dakar Rally – unquestionably the world’s most grueling rally raid. These endeavors gave us some impressive homologation specials like the iconic Lancer Evolution, but also a very intriguing performance off-roader.

The brand’s success story in the Dakar Rally starts in 1985, when a couple of modified first-generation Pajeros (aka Montero or Shogun) were lined up to compete against Land Cruisers, Range Rovers, or Mercedes 289GEs. Against all odds, the short-wheelbase Mitsubishis didn’t just finish, but did so in first and second place. That campaign signaled the start of a dominant, record-breaking run. By 2007, the Japanese manufacturer had become the most successful name in Dakar history, raking up twelve overall victories - seven of which came in consecutive years (2001-2007).

The Dakar program also resulted in the 1997-1999 Pajero Evolution, a badass version of the second-gen SUV that was developed for the competition’s production-based T2 category, but also to give enthusiasts a taste of the brand’s all-terrain-conquering rally raid weapons.

Although it was largely based on the short-wheelbase, two-door Pajero, the Evo looked much more aggressive. Like its Lancer-derived sibling, it donned several beefed-up panels that made it incredibly cool. These include beefier wheel arches to accommodate the wider track, a unique front bumper that incorporated dual fog lights and increased the approach angle, a lightweight aluminum hood with a large dual scoop for better cooling, two awesome fin-like rear spoilers conceived to improve aerodynamics, and a series of heavy-duty skid plates to protect the underbody when talking rough terrain.

Inside, most of the elements from the standard Pajero were kept, with the only noticeable upgrade being a set of Recaro sport seats that offered much better side bolstering.

While it looked much better than the stock two-door, the Evo’s truly spectacular upgrades were hidden from sight. Its chassis was comprehensively reinforced and equipped with a series of rally-oriented hardware. The long-travel suspension system featured coil-sprung wishbones at the front and a bespoke multi-link independent setup at the rear.

Power came from a 6G74 3.5-liter dual overhead cam (DOHC) V6 which had MiVEC (the company’s variable valve timing technology), dual plenum variable intake, forged conrods, and a multi-port injection system. Due to the notorious Gentleman’s agreement between all Japanese automakers, the engine was rated at 276 hp and 256 lb-ft (347 Nm) of torque. However, in reality, it was capable of more, with several owners reporting a little over 300 hp achieved during dyno testing.

The V6 was linked to a modified five-speed automatic which featured a sport mode for manual shifting and shorter gear ratios.

The Evo’s 4WD system was comprised of two Torsen limited-slip diffs on each axle and an advanced, electronically controlled central locking differential, that allowed drivers to switch between conventional 4WD, high-torque 4WD, or RWD. Moreover, the switch between 2WD and 4WD could be performed on the go at speeds of up to 62 mph (100 kph).

On asphalt, the rabid, little SUV could sprint to 60 mph (97 kph) from a standstill in 7.6 seconds and reach a top speed of 130 mph (210 kph) – impressive figures for a vehicle that wasn’t designed for speed. Of course, high-speed driving on paved roads wasn’t as engaging as it was in a Lancer Evo, but once it was introduced to gravel, sand, or snow, the Pajero Evo became an unrivaled, thrill-inducing beast.

In Dakar-spec, it helped Mitsubishi earn a dominant 1-2-3 finish in both the 1997 and 1998 campaigns. Even 25 years after its debut, it remains the most dominant model in the history of the legendary rally.

Produced in approximately 2,500 examples, the street version of the Pajero Evolution remains one of the most impressive performance-oriented 4x4s ever built.

If you would like to learn more about it and see it tackle some gravel, we recommend watching the YouTube video below by Petrolicious. 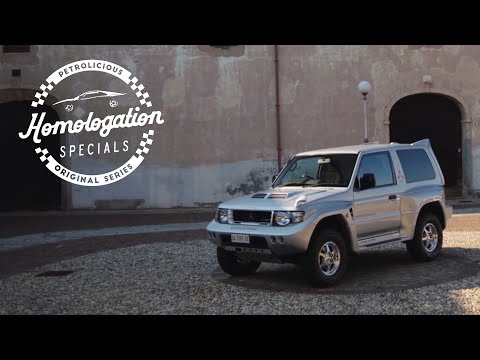