Sebastian Toma
Travis Pastrana has set the new record time at Mount Washington Hillclimb. In a single run, he beat his old record from 2017, while also obtaining the overall event victory. It all happened this past weekend when the 2021 edition of the oldest hillclimb event in North America took place.
33 photos

For the 2021 edition of the Mount Washington Hillclimb, Subaru Motorsports USA prepped the Airslayer STI, which is the same 862-horsepower 2020 Subaru WRX STI employed in last year's Gymkhana video. The car was developed with the help of Vermont Sportscar.

While the shell is stock, based on a road-going model, including an STI S209 carbon-fiber roof. The body has received thorough attention in the aerodynamic department, as well as a stroked 2.3-liter boxer engine with new internals to allow a 500-hp jump in power.

The narrow and steep route at Mount Washington Hillclimb is 7.6 miles (12.23 km) long. Travis Pastrana's former record time there was 5:44:72 in 2017. In his 2021 run, Travis Pastrana managed to break his former record by sixteen, with a time of 5:28.67. This year's result beat the second-fastest competitor's time by over 45 seconds.

So, how did he do it? According to Subaru, the Airslayer STI comes with significant improvements in downforce, which helped the talented driver to face the shifting grip levels of this course, along with the uneven surface and the other challenges posed by the Mt. Washington Hillclimb. In comparison to the Subaru used in 2017, the Airslayer STI also came with more horsepower, an improved suspension, a reduced overall weight, and other modifications to make it as fast as possible while sticking to the rule book.

Mount Washington Hillclimb is the oldest ever event of this type in North America. The first race held there was in July 1904, which was twelve years before the inaugural Pikes Peak Hillclimb in Colorado. Unfortunately, the Climb to the Clouds, as Mt. Washington Hillclimb is called, ran sporadically from its first year to 1961, then paused until 1990, from where it was run consistently until 2001.

Ten years ago, the race came back from a decade-long break to mark the 150th anniversary of the Mt. Washington Auto Road. From there, the event was held every three years. The 2020 edition was delayed until 2021, but we hope to see it take place at a regular pace in the future. 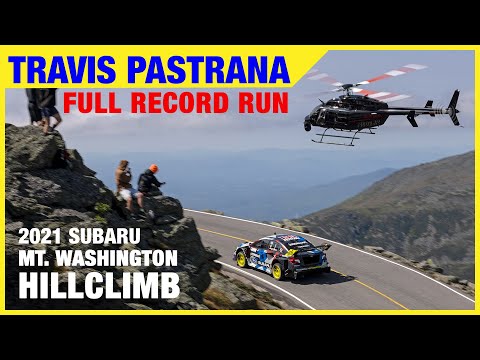 Editor's note: Photo gallery shows 2020 Subaru Airslayer STI in various moments of its development, as well as in its presence in the 2020 Gymkhana 11 video.