2 Gymkhana 2022 Could Be the World's Greatest Automotive Video, Pastrana Ends up in Hospital

3 Gymkhana 2022 Might Be the Wildest One Yet, Drops on December 6th

The Japanese automaker introduced the sixth generation of the Impreza at the 2022 Los Angele Auto Show in 2022 as a 2024 model-year.

While the Impreza nameplate started only as a sedan, with the introduction of the 2024 model-year the famous Subaru compact vehicle became available only as a hatchback. Still, the automaker offered a four-door version only for the WRX version but not for the rest of the range. The sixth generation of the Impreza was available in three trim levels.

At first sight, it was the same vehicle as the 2020 Impreza. Yet, the front fascia received new upgrades, such as LED headlights for the entire range. Moreover, the car lost its chromed trims from the grille and the side scoops. Instead, Subaru placed only black plastic elements to adorn the car's front fascia. From its profile, depending on the trim level, the Impreza featured shiny black or body-color door mirrors. Finally, at the back, a black roof spoiler decorated the tailgate. At the same time, the c-shaped taillights also sported LED technology.

The cabin was fit for five adults and provided a decent room for the rear passengers. At the front, the bolstered seats offered some side support, appreciated by those who asked for more from their Subaru. In addition, the driver benefited from the EyeSight Driver Assist Technology that helped the one behind the wheel to control the car in any situation. Atop the center stack, Subaru installed an option for an 11.6" touchscreen for the infotainment system that featured wireless Android Auto and Apple CarPlay. Finally, the Impreza kept the 60/40 split-folding rear seats that increased the trunk's volume.

Under the hood, Subaru installed a choice of two gasoline engines. The lower trim levels were powered by a 2.0-liter flat-four engine paired with a CVT. At the same time, the RS received a 2.5-liter powerplant with the same configuration paired with Subaru's Lineartronic CVT that mimicked an eight-speed automatic in manual mode. As usual, the Impreza was available exclusively as an all-wheel drive affair. 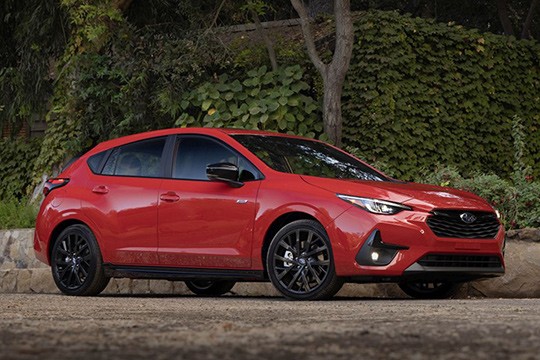