4 2021 Acura TLX A-Spec Drag Races Mazda6 Turbo, There Can Be Only One Winner

Mircea Panait
At $32,250 excluding destination charge, the Veloster N may seem a little overpriced in comparison to the Volkswagen Golf GTI. But as opposed to the German rival, the South Korean model comes loaded with pretty much everything you want in a hot hatchback. With the exception of an eight-speed DCT that adds $1,500 over the six-speed manual box, that is.
60 photos

Going for the Hyundai comes with a few other perks, starting with three years of complimentary maintenance and a 10-year limited warranty for the powertrain. If this coverage doesn’t matter as much to you as tunability, fret not because a JB4 piggyback system can extract Subaru WRX STI levels of horsepower and torque from the 2.0-liter turbo four-cylinder motor.

This particular JB4-tuned Veloster N, for example, is rocking 305 force-fed horsepower and 295 pound-feet (400 Nm) of torque whereas the completely stock Subaru WRX STI on the other side of the drag strip offers 305 horsepower and 290 pound-feet (393 Nm) of torque from 2.5 liters of displacement and a boxer configuration. Differences extend to the body style as well, and lest we forget, the Japanese sedan is gifted with an all-wheel-drive system.

Keep this in mind as you watch the following video because the Hyundai can’t get a clean launch. The wheel spin isn’t exaggerated thanks to the rather soft JB4 ECU remapping, but still, the Veloster N can’t catch it over the quarter-mile regardless of driving mode. Things change from a roll, though. From 45 kilometers per hour (28 miles per hour) and with N Mode engaged, the hot hatchback makes easy work of the Scooby even with sloppy shifts.

In addition to no wheel spin, racing from a roll is advantageous for the Hyundai because the inline-four engine develops torque far sooner and over a wider rpm range than the four-cylinder boxer. In bone-stock specification, both models deliver maximum horsepower at 6,000 revolutions, but the Subaru WRX STI sustains 290 pound-feet from 4,000 to 5,200 rpm while the Veloster N peaks at 260 pound-feet from 1,450 through 4,700 revolutions. 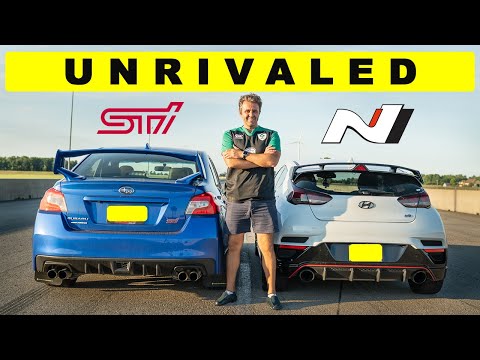