2 This 1979 Porsche 928 Taught Tom Cruise All About Stick Shifts, Soon for Sale

3 Tom Cruise Grabs Cameraman, Keeps Him From Sliding Off Train During MI7 Stunt

5 Club Racing 1986 Porsche 911 Needs to Be Back in the Race, Has All It Takes
Car video reviews:
Coverstory

In terms of sales and popularity, the Porsche 911 3.2 series proved very successful back in the mid to late 1980s, so the fact that a massive Hollywood star such as Tom Cruise bought a Targa variant should come as no surprise. Besides, he clearly felt a need for speed.
34 photos

According to its Bring a Trailer ad, this car, a black-over-black 1986 Porsche 911 Carrera Targa, was owned by Cruise between April of 1986 and February of 1987. This means he bought it after having already wrapped production on Top Gun, a movie that came out in May of 1986 and went on to become that year’s highest-grossing film.

Whoever ends up with the winning bid, they’ll surely be happy about the fact that the car’s only done 8,785 miles (14,138 km) under previous ownership and that it was also repainted last year. In terms of highlights, we should mention the Euro-spec H4 headlights, integrated front fog lights, new windscreen, Fuchs 16-inch wheels with black center hubs, and the relatively new Continental Extreme Contact tires.

Inside of this classic Porsche 911 you’ll find black leather seats, a matching dashboard, carpets and door panels, plus several convenience features such as the power-adjustable sport seats, cruise control, power windows and a Blaupunkt Monterey cassette stereo system. Even though the entire cabin was refurbished last year, the air conditioning system is said to be out of action.

As for performance, there’s a rebuilt air-cooled 3.2-liter flat-six engine, powering the rear wheels with the aid of a five-speed manual gearbox. On paper, you could get this 911 from zero to 60 mph (97 kph) in just over 6 seconds back in the day, meaning it’s reasonably quick, even by today’s standards.

Ultimately, the best thing about this car is undoubtedly its ownership history – an actor that’s stayed at the top of his game for four different decades and shows no signs of slowing down. Now go ahead and practice saying this in the mirror: “Oh you like it? Thanks, I just got it. It used to belong to Tom Cruise.”

Also, who can forget Tom’s epic line from the 1983 movie Risky Business: “Porsche. There is no substitute”. To be fair though, his character was driving a 928 at the time. 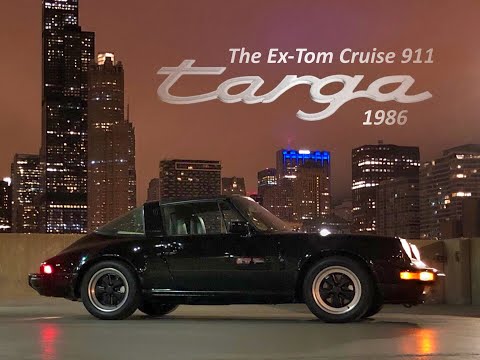