Martian Surface Seems to Have Bullet Holes in It, Scientists Don't Care About That

Aurel Niculescu
Now the flagship of the passenger car lineup in Acura’s roster, the TLX also comes flavored with the legendary Type S branding. Will it be enough to stomp on the smaller and more affordable Honda Civic group sibling?
35 photos

Normally, the much larger 2022 Acura TLX Type S, with its all-new turbocharged 3.0-liter 355-horsepower V6 and Super Handling All-Wheel Drive (SH-AWD), would have no problem facing a Civic. Especially one that belongs to the past (it is a tenth-generation model) and comes equipped with an engine that is half the size.

So, 3.0 V6 and AWD against the Civic's front-wheel-drive and 1.5-liter turbo. Who would come on top from a dig? Naturally, the TLX Type S. Alas, this crimson-wrapped and carbon fiber-hooded Civic is no stock affair. Instead, the compact Honda was tuned to around 300 horsepower. Still not a fair game, right? Given the auto versus CVT, it would only be normal.

However, do take a look at the specifications (from the 0:25 mark), never mind the hp mistake for the Acura, and carefully read the weights. There is a major difference. One that gives the heft advantage to the smaller, nimbler contender. Alas, it does not matter when doing a classic drag race. Or two.

As such, on both quarter-mile accounts, it was an easy challenge for the feisty Acura. It stomped all over the tuned Civic, and during one of the passes, it was about “four buses away!” That is a substantial difference, indeed, even on Sam CarLegion's windy strip. And one that shows exactly how much of a difference AWD, and a bit of additional oomph, makes in this sort of situation.

On the other hand, there is a major reversal of roles once they start the second phase of the confrontation. The traditional rolls from 50 kph/31 mph paint a completely different story altogether when they kick off at the 3:47 mark. So, this time around, the Civic comes up on top without any mercy. Even when the TLX got a head start during the second roll, it just punched through the victory with amazing ease... 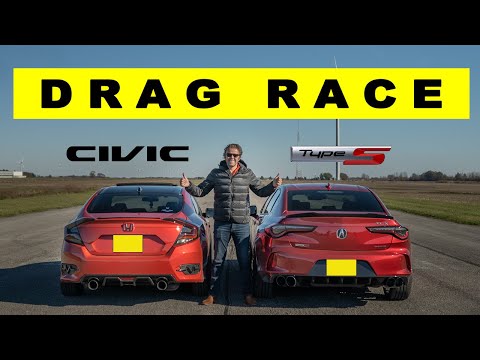