Normally, a 750-horsepower Roush Stage 3 Ford Mustang should have absolutely no problem against anything with roughly two-thirds of its power. However, the beauty of quarter-mile racing is that surprises do occur...
26 photos

For anyone not accustomed to the Sam CarLegion channel on YouTube, all we can say is that its host loves traditional straight-line acceleration battles. He also deals with reviews from time to time, but fans of this Canadian outlet know very well that quarter-mile action is king here.

As opposed to organized dragstrip racing, the channel uses a windy stretch of tarmac. So, the unprepped surface adds another layer of involvement from all parties. As such, people need to rely mostly on their skill and ride performance in the face of surface adversity. And do not think for a second the human factor does not have a major influence.

Here is a cool example. The latest video battle as of January 24th (embedded below) involves a white Kia Stinger GT equipped with the turbocharged 3.3-liter V6 engine. It does not arrive in stock form because it needs to fend off the attacks from a black Roush Stage 3 Ford Mustang GT that’s supercharged and capable of throwing out on the street a total of 750 horsepower.

Logic dictates that with “just” 500 ponies, the tuned Stinger GT does not stand a chance. But there is a caveat: the Korean liftback is AWD, while the American coupe is RWD. And even the latter’s driver came out into the open in the comments box and thoroughly appreciated the performance of the Stinger GT.

Quite the sportsmanship, especially since the first round (at the 5:50 mark, drag race) went to his opponent. That is right, Sam and his borrowed, tuned Kia Stinger GT with 500 horsepower thrashed a 750-horsepower Roush Mustang. And it was all because of one little human mistake: a missed gear change!

The rest of the skirmishes, which involved another battle from a standstill (at 7:17) as well as the traditional roll races (from the 9:10 mark), were less eventful, though. This time around, everyone did their part, and the Roush Mustang proved to be RWD supreme, beating the AWD Kia some car lengths apart. So, in the end, everyone was shocked... but for distinct reasons! 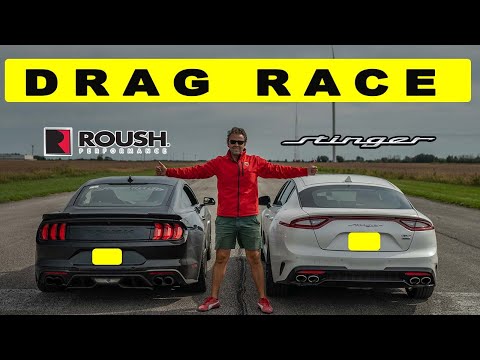