Available in conjunction with the EcoBoost and EcoBoost Premium trim levels, the 2.3L High Performance Package is pretty darn expensive. This $6,150 option improves the force-fed pony car with a Torsen limited-slip rear diff, 255/40 by 19-inch tires all around, better springs, larger brakes, 20 more horsepower, and visual enhancements both inside and out.
6 photos

Also gifted with 350 pound-feet (475 Nm) at 2,500 revolutions per minute, it’s hard to criticize this pack’s contents although the price remains a bit steep considering that a few more grand can get you the 5.0-liter V8 lump.

Nissan’s premium division also uses a twin-turbo V6, which is a clear advantage over the Dearborn-based automaker’s turbo four-pot engine. The question is, which of these two is quicker in the quarter-mile showdown?

Sam CarLegion is much obliged to settle things with a series of drag races that ends in utter defeat for the pony car from Michigan. The Infiniti may be lighter and better equipped for the job thanks to all-wheel drive, but with 300 horsepower and 295 pound-feet (400 Nm) of torque produced at 1,600 revolutions per minute, it doesn’t match the Mustang’s high-output mill.

Be that as it may, the way that V6 builds up torque over a broader engine speed range does help. The only piece of hardware that lets the Japanese coupe down would be the Jatco-developed 7R seven-speed automatic box. 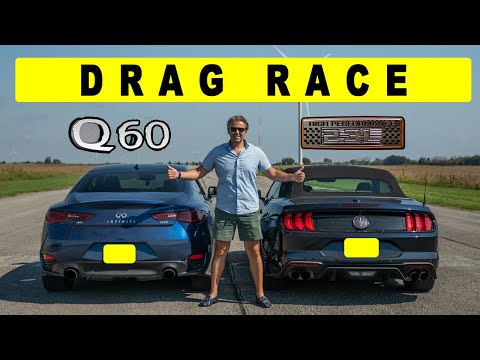