In 2017, Acura introduced the facelifted version of the RLX on the North American market, improving the Japanese automaker's flagship.

The RLX took the flagship from the previous RL and Legend lineups left. The Legend was a very appreciated vehicle worldwide, whether it sported the Honda or the Acura badge. Moreover, the RLX was sold as Honda Legend in Japan. Meanwhile, technology evolved, and the Japanese carmaker improved its skills in creating hybrid sports vehicles, such as the NSX. As a result, some of the ideas met on the 2018 model-year RLX were carried over from that car.

Up front, the RLX sported the new design language made by Acura and seen on the MDX model. Its grille featured a 3D pattern with lines and dots that converged to the center towards the Acura chromed badge. A chromed trim surrounded it, and, in addition, more chromed elements were added to the lower bumper around the side scoops. The diamond-inspired look of the headlights featured LED lamps with adaptive lighting. From its profile, the RLX looked more like a sports sedan than a regular, mid-size one. In addition, the carmaker added a few more chromed trims at the back around the side exhausts and on the trunk's lid.

Inside, the carmaker listened to the critics who said that the interior was not as luxurious or didn't provide such a premium feel as some of its competitors. Thus, Acura introduced a higher quality leather upholstery, new wood trims, and seats.

Under the hood, Acura offered a choice of two drivetrains. The base version featured a 3.5-liter V6 that sent the power to the front wheels via a ten-speed automatic. At the same time, the top model received a 377 hp (382 PS) hybrid powerplant that sent its torque in all corners via a seven-speed automatic. 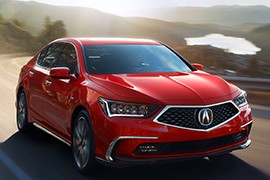 4 New Acura Integra Gets Dressed in Racing Attire, Will Take On the Pikes Peak Hill Climb

5 Hovering Acura NSX Doesn't Need Any Roads, at Least It is Not Dripping CGI Oil