1 Tadpole Tiny House Is the World’s First Tiny to Double as a Car Carrier, Quite Elegant

Transformable Tiny House Is a $44,000 Magical Home Built From Scratch

Elena Gorgan
Magic is only for the hopeless dreamer and kids. And for tiny house dwellers in New South Wales, Australia – as this gorgeous build proves.
18 photos

It’s called Petite machine à habiter, which translates to “small car to live in,” and it’s named in honor of French architect Le Corbusier and his ‘50s micro-house. Designed after the principles of sacred geometry, this tiny house is noteworthy both for its artsy design and finishes, and for the fact that it features two pop-outs that considerably enhance the living space.

The Petite machine à habiter is located in Australia and was built from scratch by married couple Gauri Ma and Nirvana. The triple-axle trailer it sits on, as well as the steel frame on it, was done by a tiny house company, but everything else is what you could call a DIY (do-it-yourself) job. Gauri Ma and Nirvana worked tirelessly on it for more than a year, before they were able to move in.

The video at the bottom of the page, dated 2019, is a tour of the near-completed tiny. At the time, the couple was still working on making it run entirely on solar power and to add a bathroom to the rear, comprising a shower and a compost toilet, with direct access to the rear deck. Even so, it’s a most impressive tiny: artful and very colorful, cozy and packed with personal stuff, yet still very spacious and practical.

The tiny offers a living surface of 32 square meters (344.5 square feet), which is a lot by tiny house standards. At the same time, it remains perfectly road legal, which means that you can tow it with a 5-ton flatbed truck and move it to another location. The secret lies in the two expansions that almost double the width – something like the pop-ups of motorhomes, but with more effort required for assembly.

Nirvana is an engineer by formation, and when he started dating Gauri Ma, they both wanted their very own home, one where they would no longer have to pay rent or move out of when the contract was up. Inspired by the famous Castle RV from New Zealand, a regular truck that pops up at camp into a castle, as its name implies, Nirvana set out to design a tiny home with similar capabilities.

He worked with a tiny house company for the design of the trailer, and then did the rest himself, with Gauri Ma. He opted for rounded corners and a sloped roof, porthole-style windows, repurposed materials, and recycled everything, and was finally able to build the house of his dreams. It’s cozy, too, with a solarium-style living room slash yoga studio, a full kitchen, a bedroom, and a wardrobe area that will, one day, incorporate the bathroom.

This tiny doesn’t have a loft, but it does feature overhead storage. Additional storage is hidden in the floor: for pots and pans and empty jars, old files, and office supplies like printers and laptops. The kitchen is located on the North side and comes with a traditional four-burner stove, a fridge that doubles as a cooking top, a sink, and plenty of counter space for meal prep.

By design, most interior spaces can open on one side to the outdoor – even the shower will have this functionality once it’s put in, because Gauri Ma loves the idea of living outside. To that same end, the couple built a gorgeous garden for produce and flowers, a shed for sheltered dining, and an outdoor shower. At the time the video tour was filmed, they were living on a piece of land rented from a friend, but shortly after, moved to another location.

The initial budget for the build was of AU$50,000 (US$36,700 at the current exchange rate), including the trailer and the steel superstructure. In 2019, the couple said they had stopped counting expenses at AU$40,000 (US$29,323) because there was no pressure to put the finishing touches to it, now that they had moved in. Gauri Ma estimated the completed tiny would end up costing them AU$60,000 (US$45,000), which is cheap by all standards – but more so if you consider how truly magical it came out. 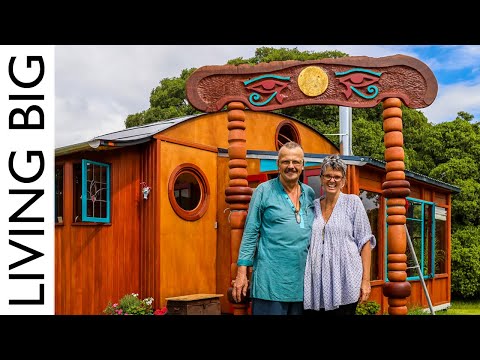