5 Smart #1 – That's How the Electric SUV From the French (?) Brand Will Be Called
Up Next

Home > News > Custom Cars
Vlad Mitrache
It'd be totally understandable if you thought the smart Fortwo was a Japanese model the first time you came across it. After all, they are pretty big on tiny vehicles over there, aren't they?
10 photos

Well, unlike Kei cars that try to keep the same practicality levels as a full car, the Fortwo never tried to fool anyone about what it can and can't do. It's a two-door, two-seat, virtually zero trunk space, odd-looking vehicle you can use to zip around town and even park perpendicularly to the curb thanks to its overall length of just over eight feet.

It's great at the limited things it can do, but don't go asking it to behave like a highway cruiser, carry as much as a pickup truck, or blaze over rough terrain like a Raptor. Well, you can't really do anything to improve its odds for the former two (the short wheelbase means it'll always be left wanting in the comfort department, and as for using it as a hauler, I won't even dignify that with a comment), but as this wonderful build that's currently on sale on Doug DeMuro's Cars and Bids website proves, you can definitely turn a Fortwo into a Baja-ready machine.

Don't get me wrong, it's not like you're going to win any competition in this 2012 smart Fortwo – maybe just the popularity contest – but just saying you were able to complete one in a smart should give you enough topics for all the dinner parties left in your life.

Don't be put off by the fact it's RWD instead of AWD – after all, it's not like you were going to take it rock crawling anyway. And when it comes to the sort of stuff this thing is best for, RWD has actually been used successfully in official competitions. Besides, it's not like the 1.0-liter three-cylinder engine could muster the power to turn all four wheels, especially when wrapped in those big, 30-inch BFGoodrich Baja T/A tires.

The top speed of this thing is limited to 65 mph (about 105 km/h), which is actually great news since you shouldn't be doing any more than that anyway considering how short the wheelbase is and how tall the smart got thanks to the eight-inch lift and the added exoskeleton. Granted, the stance has also been widened (with fender flares added for the rear wheels), but it's still not enough to instill too much confidence at high speeds.

Other modifications include three LED bars, a 4000-lbs winch mounted at the front with remote operation, a full-size spare wheel fitted at the back next to a jerrycan (the gas tank doesn't take too much fuel- it was designed for city dwellers, remember?), and a set of jack and a shovel, absolutely mandatory for any half-serious off-roader.

The interior is completely stock apart from the 9.5-inch infotainment unit that was pretty neatly installed in the dashboard and comes with full smartphone support. One of the greatest things about the Fortwo is that, despite its diminutive size, it can be used by tall people without any issues - I'm 6'6" myself (198 cm) and have lived with one for a few months.

What he won't tell you, though, is that the five-speed automatic transmission is a real pain in the you-know-where and the only way around it is to use its manual sequential feature. It's not a big deal since it makes driving a bit more involving - as does the lack of power steering – but it should be something to keep in mind before making an offer.

At the time of writing, the auction ends in six days and the highest bid sits at $7,500 with no reserve. I'm not here to tell you how to spend your money but, if you asked me, I'd say anything under $10,000 is a steal for this beauty. Fun times and a lot of admirative gazes await whoever manages to win the bid. 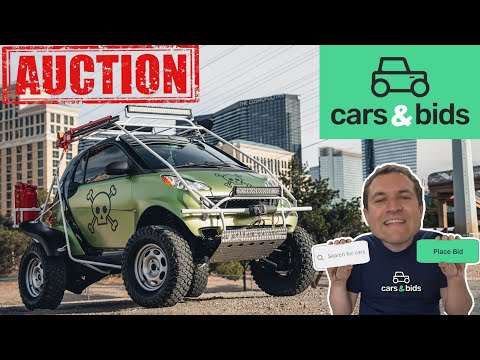