While for the first generation of the SMART, Mercedes-Benz chose to join forces with Mitsubishi. For the second generation, it shared the platform with Renault.

Mercedes-Benz was a great car-maker for most sorts of vehicles, but when it came to building small city-cruisers, its abilities were limited. Almost anything was smaller than the medium-sized cars were not fighting for top-sellers. On the other hand, Renault was very good at that game, and together, they worked on the second generation of the SMART four-four.

From the outside, it was hard to hide the SMART fourfour connection with the Renault Twingo. But it showed its personality and front fascia with the SMART fourtwo. Even though it featured a hexagonal mesh-grille on between the headlights and in the lower bumper, the motor was in the back.

Inside, there was room enough for four adult passengers. The dashboard was different than the one found on the gasoline-powered versions, with a special dial mounted on top of the instrument cluster featuring the battery charging status and power consumption.

Mercedes-Benz worked together with Renault to built the car. The motor was made by Renault, the batteries by Daimler and the final assembly in Slovakia. The 60 kW motor was fed by a lithium-ion battery pack of 17.6 kWh capacity. That was good for a range of 100 miles (160 km). 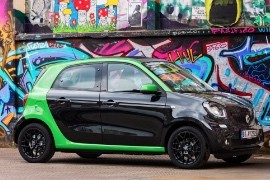