The tiniest member of the Mercedes-Benz family was the little SMART, available with two or four doors. The 2014 SMART forfour offered the basic mobility solution for four adults in a small package.

SMART forfour was built in Slovenia, at a Renault factory, the car was developed together with the French car manufacturer, which builds the Twingo model based on the same vehicle. They shared around 70% of their components, but some parts and panels were particular to each and every car. The concept of a small vehicle built on a specially designed safety cell, named Tridion, rear engine and gearbox plus a four-door version made the second generation of SMART a good choice for urban mobility.

From the outside, the SMART forfour shared the same fascia with its two-door brother. There was the same grille with a cross-drilled panel. But, unlike the first generation, it didn't feature a front-engine. The high greenhouse was needed to offer enough room inside. The 2014 forfour featured a pair of doors in the back with an almost 90 degrees opening for easy access.

Inside, the forfour featured a minimalist design for the dashboard, with a pillar-mounted tachometer. The infotainment system was mounted on the center console and it could show various information about the car and the sound system as well. The four seats inside the car were good for adults.

For the drivetrain, SMART forfour featured two engine choices mated to a standard 5-speed manual. An option of a 6-speed automatic with dual-clutch is available. The biggest advantage for its rear-engine with rear-wheel drive system was a very tight turning circle of just 8950 mm (352”) wall to wall. 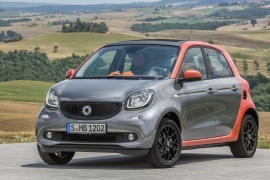