Smart introduced the facelifted version of the ForTwo's second generation at the Geneva Motor Show in 2012, and along with it, the Brabus version was also showcased in both versions: convertible and coupe.

Brabus celebrated more than 50,000 units of smart products sold with its name on them. It was the most successful vehicle sold by the Bottrop-based automaker. Its cooperation with the three-pointed-star brand brought helped it survive during the world financial crisis, and their love story continued. As a result, it was just natural to unveil a Brabus-badged product during the Geneva Motor Show, where smart unveiled the facelifted version of the fortwo in both shapes: cabrio and coupe.

At the front, the smoked boomerang-style headlights showed a meaner look. A pair of DRLs accompanied them in the front bumper's apron. A mesh grille adorned the front fascia and resembled some other Brabus performance products. Like the rest of the open-top versions of the fortwo, this one also sported a rag-top that could have been retracted behind the C-pillars that remained in place. Also, from its profile, the small city car revealed its light-alloy wheels that featured a six double-spoke design with three lug-nuts unique for the Brabus version.

The cabin boasted sport bucket seats with Brabus-embroidered headrests. To further emphasize the car's sporty character, the dashboard featured red accents on the instrument cluster and on the sides. In addition, the door cards were adorned with the same color on the handles. These small details made the smart Brabus' owners feel special. It was more of a fashion item than just a transportation device.

But Brabus didn't stop there and also improved the engine performance. Thus, the one-liter, inline-three turbocharged powerplant provided 102 hp, enough to propel the tiny vehicle to 100 kph (62 mph) from standing still in less than nine seconds. 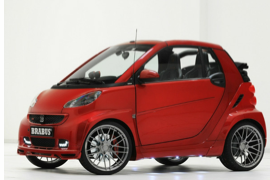